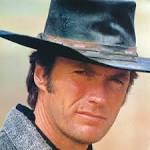 Clint Eastwood is an American film actor, director, producer, and composer. After beginning his acting career exclusively with small uncredited film roles and television appearances, his career has spanned more than 50 years. Eastwood has acted in several television series, most notably Rawhide. His role in the eight-season series led to his leading roles in A Fistful of Dollars, For a Few Dollars More, and The Good, the Bad and the Ugly. Eastwood has appeared in over 50 films, and has starred in 42 films, including Hang 'Em High, Play Misty for Me, Dirty Harry, Escape from Alcatraz, Tightrope, The Bridges of Madison County, and Gran Torino. Eastwood started directing in 1971, and in 1982, his debut as a producer began with two films, Firefox and Honkytonk Man. Eastwood also has contributed music to his films, either through performing or composing. He has even lent his voice to song in Paint Your Wagon, co-starring Lee Marvin, who also sings. He has starred in western, action, comedy, and drama films. Eastwood has been a primary character in two film series: as the Man with No Name in the Dollars Trilogy, and as Harry Callahan in the Dirty Harry series. Other notable roles include Josey Wales in The Outlaw Josey Wales, the Stranger in High Plains Drifter, Philo Beddoe in Every Which Way but Loose and its sequel Any Which Way You Can, Preacher in Pale Rider, William Munny in Unforgiven, Frankie Dunn in Million Dollar Baby, and Walt Kowalski in Gran Torino.

Share your thoughts on Clint Eastwood' movies with the community:

Use the citation below to add this director page to your bibliography: