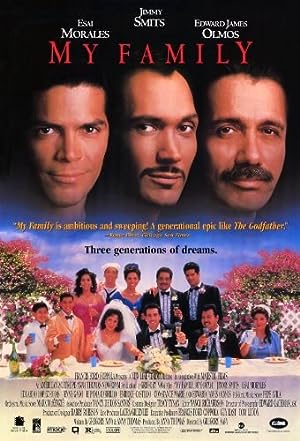 Synopsis: This epic film traces over three generations an immigrant family's trials, tribulations, tragedies and triumphs. Jose and Maria, the first generation, come to Los Angeles, meet, marry, face deportation all in the 1930s. They establish their family in East L.A., and their children Chucho, Paco, Memo, Irene, Toni, and Jimmy deal with youth culture and the L.A. police in the 1950s. As the second generation become adults in the 1960s, the focus shifts to Jimmy, his marriage to Isabel (a Salvadorian refugee), their son, and Jimmy's journey to becoming a responsible parent.
Genre: Drama
Director(s): Gregory Nava
Actors: Edward James Olmos, Rafael Cortes, Ivette Reina, Amelia Zapata
Production: New Line Home Entertainment
Nominated for 1 Oscar. Another 3 wins & 4 nominations.

Whenever I see the bridges

I remember my family.

I remember my father | and my mother,

and Memo, the lawyer.

My crazy sisters... | Toni and Irene.

But to write the story | of my family,

I have to begin where millions | of stories have begun...

in a small village in Mexico | a long, long time ago.

That's just the way my father | used to tell the story.

His brother Roberto really died | of a ruptured appendix.

In those days | just after the revolution,

and my dad's in-laws couldn't | afford to feed an extra mouth,

so my father had to leave.

Now, the only living relative | my father knew about

lived somewhere north | in a village

He figured he could | walk there in a day or two.

The other side of the world.

My father thought about it.

It took him over a year

to reach the other side | of the world.

He walked most of the way,

and we kids, well, we heard | of that journey many times.

He was attacked by 10 bandits | in Sonora

and had to beat them off | with a cactus branch.

He rode the back | of a snorting mountain lion.

the one in California.

The border? | Well, in those days,

the border was | just a line in the dirt.

because he didn't come | from anywhere else.

He was born right here | in Los Angeles,

when it was still Mexico.

My father had found | a new home.

Even then, | there were bridges.

My father soon | joined the people

crossing from their barrio | on the east side of the river

to do the work of the city | on the other side.

They mowed the lawns, | took care of the children,

but no one | from the west side of the river

ever crossed the bridges | into the barrio.

Make sure that they're | all cleaned up

to go to Grandma's tonight.

Give us a kiss. Love you.

first me, then my sister Irene.

My earliest memory is of the face

of that gentle old man

looking at me and smiling.

And I remember my father | always working in his milpa...

corn in the back | and beans in the front.

And that's the way | it always was at my house

for as long | as I can remember.

the children are wonderful.

There is | no greater blessing

in all the world than children.

We're going to have another?

Maria, I knew it!

I knew it, Maria.

I'm going to have | another son,

is going to be a special boy.

I remember | when it happened.

It was that Sunday | afternoon. Remember?

crashed his car into the river?

Yes. That was the day.

because that day | I got out of bed

and walked out | to the porch.

I was standing there.

I looked up into the sky,

and I saw an angel pass by.

Then came the day | everything changed...

when my mother didn't come home | from the market.

It was the time | of the Great Depression.

I guess some politicians | got it into their heads