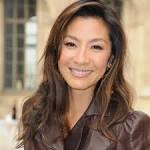 Michelle Yeoh Choo-Kheng, PSM (; born 6 August 1962) is a Malaysian actress. She rose to fame in 1990s Hong Kong action films, and is best known internationally for her roles in the James Bond film Tomorrow Never Dies (1997), and martial arts film Crouching Tiger, Hidden Dragon (2000), along with recent international English films and series. Born in Ipoh, Malaysia, she won the Miss Malaysia pageant of 1983 at the age of 20. She later achieved fame in the early 1990s after starring in a series of Hong Kong action films in which she performed her own stunts, such as Yes, Madam (1985), Police Story 3: Supercop (1992) and Holy Weapon (1993). She was credited as Michelle Khan in her early Hollywood films. She was nominated for the BAFTA Award for Best Actress for her work in Crouching Tiger, Hidden Dragon. She has appeared in many English, Mandarin and Cantonese language films. Her other works include Memoirs of a Geisha (2005), Reign of Assassins (2010), Crouching Tiger, Hidden Dragon: Sword of Destiny (2016), Star Trek: Discovery (2017) and The Lady (2011), in which she portrayed Aung San Suu Kyi. In 2018, she starred in the American romantic comedy-drama film, Crazy Rich Asians. She has also co-starred in the 2018 film Master Z: The Ip Man Legacy and the 2019 film Last Christmas.

Share your thoughts on Michelle Yeoh's movies with the community: