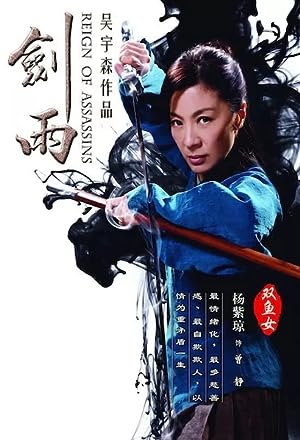 Synopsis: Set in ancient China, Zeng Jing is a skilled assassin who finds herself in possession of a mystical Buddhist monk's remains. She begins a quest to return the remains to its rightful resting place, and thus places herself in mortal danger because a team of assassins is in a deadly pursuit to possess the remains which holds an ancient power-wielding secret.
Genre: Action, History
Director(s): Chao-Bin Su
Actors: Michelle Yeoh, Woo-sung Jung, Xueqi Wang, Barbie Hsu
Production: The Weinstein Company
2 wins & 18 nominations.

He stayed in the royal palace for 3 years.

He then remained in the Jinhua mountains...

mastering the art of kung fu.

After he died he was buried at Mt Xionger,...

but later his remains were stolen...

and split into two halves.

Later a rumour arose whomever possessed his remains...

could master kung fu and rule the martial arts universe.

Since then many battles have been fought...

in a quest to obtain the remains.

Now the Dark Stone, a secret guild of assassins,...

has entered the violent battle.

Recently, there has been a rumor that 1/2 of the remains...

are in the hands of Minister Zhang Haiduan.

have raided the ministers residence

and killed him and his son Renfeng.

Amidst the chaos, Drizzle makes off with Bodhi's remains

and disappears without a trace.

Are you Mrs Cai?

I've heard you have a house for rent.

This was Dr Huang's house.

He returned to the village last year.

The house has been empty since then.

The house is very big.

Will you be living here alone?

The monthly rent is 3.2 taels of gold,

but if you take it now I reduce it to 3 taels.

I will take it. Here is three months deposit.

Wonderful! I will bring the contract tomorrow.

Oh, I still haven't asked you your name.

As soon as you deliver the head of Drizzle

to the bank in Luoyang City

you will be rewarded by Dark Stone

that Drizzle is carrying with her.

and take out the old bricks.

Who gets to keep the remains of Bodhi from Drizzle?

According to the rules of the martials arts universe,

it is finders, keepers.

We are not afraid

of the Dark Stone.

If we capture the remains of Bodhi,

then they are ours to keep.

Put the four cabinets against the wall

and put the washstand inside.

She is heading south

and will be near Huizhou

in a few days.

I am willing to turn into a stone bridge

and endure 500 years of wind and rain.

The Dark Stone is the hidden power at court.

It is said that they hold the lives

of all the officials and mandarins in their hands.

are now in Drizzle's hands.

It showers the victim with a barrage slashes

so they look as if they've been cut by drizzling rain.

We must work together to kill her

and divide the silver equally amongst ourselves.

Do you think your kung fu is good enough?

Once you enter the martials arts world there is no getting out.

We will be waiting for you in hell.

For performing this surgery to change your face,

I have one other condition.

I need to know why are you doing this.

I carried the remains with me to the bridge

and just as I was leaving the city...

You killed my father.

There was the Minister's son Zhang Renfeng.

Amazingly he was still alive.

That was the first time I saw wisdom.

So you are Drizzle.

Four strokes of your sword are incomplete

I worry that one day

you meet the real master and be cut to pieces.