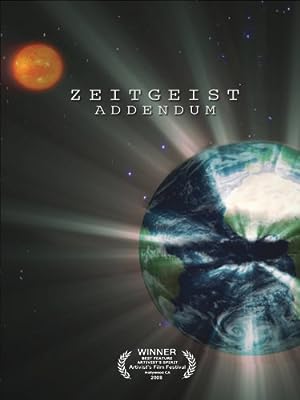 Synopsis: Zeitgeist Addendum, attempts to locate the root causes of this pervasive social corruption, while offering a solution. This solution is not based on politics, morality, laws, or any other "establishment" notions of human affairs, but rather on a modern, non-superstitious based understanding of what we are and how we align with nature, to which we are a part. The work advocates a new social system which is updated to present day knowledge, highly influenced by the life long work of Jacque Fresco and The Venus Project.
Genre: Documentary, History, War
Director(s): Peter Joseph
Actors: Jacque Fresco, Roxanne Meadows, John Perkins, George Carlin
Production: Gentle Machine Productions

"The old appeals to racial, sexual or religious chauvinism,

to rabid nationalist fervor are

beginning not to work." - Carl Sagan

"The business of who I am, or whether

I'm good or bad, or achieving or not,

all that's learned along the way." - Dr. Richard Albert

we can change it anytime.

It's only the choice. No effort, no work,

no job, no savings of money." - Bill Hicks

"I realised I had the game wrong.

The game was to find out what

I already was." - Dr. Richard Albert

We will see how very important it is

to bring about, in the human mind,

The crisis, is a crisis of consciousness.

A crisis that cannot anymore,

And, considering what the world is now,

with all the misery,

is still as he was.

And, he's built a society

along these lines. - J. Krishnamurti

It is no measure of health to be well adjusted

is composed of a series of institutions.

To institutions of social class,

It is obvious, the profound influence

these traditionalized structures have

in shaping our understandings and perspectives.

Yet, of all the social institutions, we are born into,

directed by, and conditioned upon..

There seems to be no system as taken for granted,

as the monetary system.

as one of the most unquestioned forms of faith there is.

How money is created,

the policies by which it is governed,

and how it truly affects society,

are unregistered interests of

the great majority of the population.

In a world where 1% of the population

owns 40% of the planets wealth.

In a world where 34.000 children die every single day

from poverty and preventable diseases,

and, where 50% of the world's population

lives on less than 2 dollars a day...

One thing is clear.

Something is very wrong.

And, whether we are aware of it or not,

the lifeblood of all of our established institutions,

and thus society itself,

is critical to understanding why

our lives are the way they are.

viewed with confusion and boredom

quickly deters people from attempts at understanding it.

However, the fact is:

The complexity associated with the

financial system is a mere mask.

Designed to conceal one of the

humanity has ever endured.

None are more hopelessly enslaved than

those who falsely believe they are free.

A number of years ago, the central bank

of the United States, the Federal Reserve,

This publication detailed the

as utilized by the federal reserve and the

On the opening page the document states its objective.

The purpose of this booklet is to describe

the basic process of money creation

in a fractional reserve banking system.

It then precedes to describe this fractional reserve process