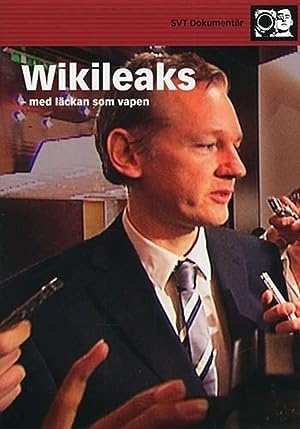 It's been reported that WikiLeaks

than the rest of the world's media combined.

Can that possibly be true?

Yeah, can it possibly be true?

that a little group of activists is able to

release more of that type of information

than the rest of the world press combined.

Picking up the wounded.

I'm trying to get permission to engage.

Line them all up.

Good evening. They're the secret files

from the Iraqi War.

WikiLeaks have made public

the most extensive classified military

and diplomatic material ever.

What they've released is challenging and provoking governments

with skeletons in their cupboards all over the world.

We should condemn the disclosure

of any classified information

by individuals and organisations.

The people who are in power

will not give that power away freely.

That is just unfortunately a fact of nature.

all versions of documents obtained directly or indirectly

from the Department of Defense databases or records.

It's only now that the true story

behind the development of

this closed organisation is coming to light.

But while the world's discussing

whether Assange is a rapist or a saint,

WikiLeaks continue to pursue their own political agenda.

Every release that we do of material has a second message,

and that is we set examples.

If you engage in immoral, in unjust behaviour,

and you will suffer the consequences.

What we have here is a new breed of rebel -

IT guerrillas without a national base.

these are their command and control centres,

spread all over the world,

and the battle's already started.

The general in charge of

targeting this institution and its products.

WikiLeaks have become a global force

to be reckoned with in record time.

It may not be easy to grasp at first,

but the release of classified information

is just a small step

in a long-term political and ideological battle,

and that leaking classified information is a weapon

and not a means unto itself.

The public has a right to know materials.

And the historical record has a right to have materials

If something is interfering with that process,

we will undo it.

He's been called the 'Scarlet Pimpernel' of the computer age.

If one were to judge him on his looks alone,

you could call him a chameleon,

given the frequency of his change of hairstyles

during the six months we've been following WikiLeaks.

But if you look under the surface,

has been revolting against the powers that be for a long time.

As a teenager in Australia,

he called himself 'Mendax',

and got a name for himself as a highly skilled hacker.

he found himself in court

pleading guilty to some 20 different charges of hacking.

I mean, we had a back door

in the US Military Security Coordination Centre.

This is the peak security...

It's for controlling the security of MILNET,

the US military internet.

We had total control over this for two years.

The US space agency NASA is one of the victims

of the Melbourne computer hacking syndicate.

American investigators, including the FBI,