Synopsis: In an alternate 1985 America, costumed superheroes are part of everyday life. When one of his former comrades is murdered, masked vigilante Rorschach (Jackie Earle Haley) uncovers a plot to kill and discredit all past and present superheroes. As he reconnects with his retired associates, only one of which has true powers, Rorschach glimpses a far-reaching conspiracy involving their shared past and catastrophic consequences for the world's future.
Genre: Action, Drama, Mystery
Actors: Malin Akerman, Billy Crudup, Matthew Goode, Jackie Earle Haley
Production: Warner Bros. Pictures
11 wins & 22 nominations.

CLOSE ON:
A "Have A Nice Day" HAPPY FACE PIN. STEAM rises

past the pin. We hear a KETTLE BOILING.

worn by EDWARD BLAKE, 63, but amazingly not far from his

too, save the LONG SCAR running down the side of his face.

Blake removes the kettle from the stove. He scoops some Asian

tea leaves from a can, dumps them in a cup .

The apartment is expensive but not quite luxurious. Terrific

New York view from the window. Blake lives well, if alone. He

sits on the couch with his cup of, tea, puts his feet up. Hits

the remote, turns the big screen TV on. The news:

the President expressed his concern over

disputes in both Asia and the Middle

CUT TO:
The PRESIDENT OF THE UNITED STATES--

The sound of a bullet at one end of the

world echoes across the ocean to the

other end. Armed conflict is not self

contained in its respective region--the

consequences reverberate through every

nation across the world and therefore

must be avoided at all costs.

CUT BACK TO:
The Anchorwoman--

While the President's position was clear,

he did not comment on whether or not he

would order Dr. Manhattan into action

should the situation continue to

CUT TO:
Stock footage of DR. MANHATTAN--a man, at least he

appears to be, who has glowing blue skin. The stock footage

shows Dr. Manhattan flying through the air as a MISSILE heads

With a wave of his hand, Dr. Manhattan stops the missile in

With another wave, Dr. Manhattan DETONATES the missile. Dr.

Manhattan disappears in the EXPLOSION . but once the

--Blake snorts at the stock footage, changes the channel--

jumps up, immediately at the ready--

--when we see the INTRUDER'S FEET entering. Slowly. Blake

sees the Intruder's face, though we never do--we only see

that he's dressed in ALL BLACK, including GLOVES and a KNIT

HAT. A look of recognition comes over Blake.

Just a matter of time, I suppose.

With sudden, blinding speed, Blake WHIPS the SAUCER from

under his cup, sending it FLYING like a saw-blade. The

Intruder BATS IT out of the air with even quicker reflexes,

from a hollowed out STEREO SPEAKER. He's a pro

. but so is our Intruder. Before Blake can get a shot

off, the Intruder is already upon him, SNATCHING the gun out

the trained killer he is. But the Intruder is much, much

faster. Younger. Deadlier. He SMASHES Blake with an elbow to

up off the ground. Brings him to the window with the great 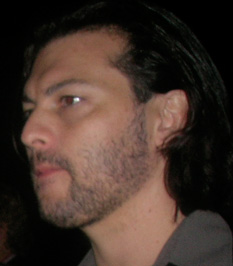