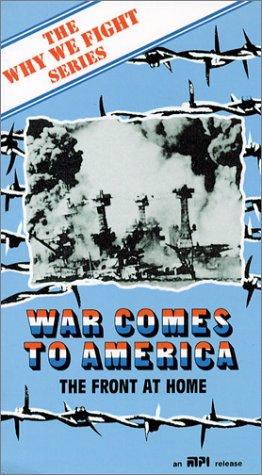 Synopsis: In this final installment of the "Why We Fight" propaganda series, the subject focuses on the United States of America. We learn of its good qualities and the things worth fighting for. With that established, we learn of the history of the United States' population shifting opinion towards siding with the Allies against the Axis until the attack on Pearl Harbour which brought America into full scale involvement in the war.
Genre: Documentary, War
Director(s): Frank Capra, Anatole Litvak
Actors: Dean Acheson, General Bergeret, A.A. Berle, Arno Breker
Production: U.S. Army Pictorial Services
1 win.

WHY WE FIGH A series of seven information films

For:
INFORMATION AND EDUCATION DIVISION

I pledge alliance to the flag, of

The United States of America,

...and to the Republic for which it

stands one nation under God...

and liberty for all...

...in the jungles of New Guinea,

...on the barren shores

...in the tropic heat of

...in the sub-zero cold over

the skies of Germany,

...in Burma and Iceland,

...the Philippines and Iran,

Fighting over an area extending

seven-eights of the way around the world.

Men from the green hills of New England,

...the sun-baked plains of the Middle West,

the cotton fields of the South,

...the close-packed street of Manattan,

...the teaming factories of Detroit,

distances of the Southwest...

...men from the hills and from the plains,

men from the villages and the cities...

Yet two years ago, many had never fired a gun,

Seen the ocean, or been of the ground.

Americans. Fighting for their country

while half a world away from it.

Fighting for their country and

more than their country.

Fighting for an idea.

An idea bigger than the country.

only have remained a willingness.

have remained only a dream.

The sea, the sky, the virgin continent.

We came in search of freedom, facing

Unknown dangers rather than bend...

...the knew of bow to tyranny.

Out of the native oak and pine, we built

a house, a church, a watchtower.

We cleared a field and there grew up

a colony of free citizens.

We carved new states out of

Then came the first test in

the defense of that liberty.

Our leader spoke our deepest needs.

Colonists are by the law of nature free-born,

as indeed all men are!"- James Otis

These are the times that try mers souls."

give me death."- Patrick Henry

In the midst of battle it happened.

Something new was expressed by men.

A new and revolutionary doctrine.

All men are created equal."

All men are entitled to the blessings life,

liberty and the pursuit of happiness."

That's the goal we had set for ourselves.

If it meant hanging, victory meant

a world in which Americans rule themselves.

We fought and froze, suffered and died.

For what? For the future freedom

A few of us doubted and despaired,

most of us prayed and endured it all.

Now we were a free-independent nation...

...the new idea had won its first test.

Now to pass it on to future Americans.

The Constitution. The sacred charter of

The blood and sweat of "We the people..."

The life, liberty, and happiness of

The people were to rule. Not some of the people,

Julius J. Epstein (August 22, 1909 – December 30, 2000) was an American screenwriter, who had a long career, best remembered for his screenplay – written with his twin brother, Philip, and Howard E. Koch – of the film Casablanca (1942), for which the writers won an Academy Award. It was adapted from an unpublished play, Everybody Comes to Rick's, written by Murray Bennett and Joan Alison. more…