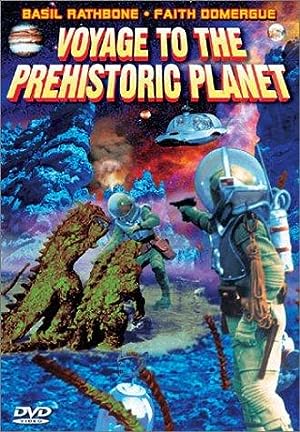 Voyage to the Prehistoric Planet

Synopsis: In 2020, after the colonization of the moon, the spaceships Vega, Sirius and Capella are launched from Lunar Station 7. They are to explore Venus under the command of Professor Hartman, but an asteroid collides and explodes Capella. The leader ship Vega stays orbiting and sends the astronauts Kern and Sherman with the robot John to the surface of Venus, but they have problems with communication with Dr. Marsha Evans in Vega. The Sirius lands in Venus and Commander Brendan Lockhart, Andre Ferneau and Hans Walter explore the planet and are attacked by prehistoric animals. They use a vehicle to seek Kern and Sherman while collecting samples from the planet. Meanwhile John helps the two cosmonauts to survive in the hostile land.
Genre: Adventure, Sci-Fi
Director(s): Curtis Harrington, Pavel Klushantsev
Actors: Basil Rathbone, Faith Domergue, John Bix, Gennadi Vernov
Production: American International Pictures (AIP)

And the next space goal is about to be reached.

The first landing by man on the planet Venus.

to that on earth, may be found on this planet...

...where so many physical conditions are like our own.

Three rocket ships of an international

...after having successfully traveled

...are in the final stages of their journey...

What is it? What's happened?

Capella, sir. I'm afraid she's been hit by a meteorite.

And almost there. It seems so unfair.

There's no fair or unfair to

a meteorite. You get hit.

I'd just spoken to them.

Attention, crews of Sirius and Vega!

We were deeply sorry to learn of the loss of the Capella.

Flight Path A, however, must still be followed.

Therefore, we request both ships to go into orbit

and remain there til the arrival of Spaceship Esther...

...due to blast off here immediately.

about conditions on Venus.

It's Hartman. He's the one who built this baby.

And know when he says we should go

fly all around Venus...

Better plan on it.

There's more I can do than orbit and wait.

What do you mean?

Look, the plan before was to land at one ship.

That's true, with the cybernetic machine.

You keep it! Why don't I pilot?

But, Andre, the machine will study the land.

This I know. But I'm more observant, more apt

to see what's going on.

You don't wanna send a monster.

Venus must be seen by more than a robot!

along with you, Andre.

What about Hartman's plan?

- Hartman would agree with me.

- But we can't take that chance.

Then, what do we do?

We contact Kern, and we ask him to have the

Assuming he'll be out for it.

Preview us. Be extra precise.

There are changes you must make in our

Plan now for Sirius and Vega.

You, me and Sherman.

On the same spaceship.

on the second ship.

Problem? Land on Venus and return.

Then one of six must remain.

That one shall be me.

This is command ship Vega calling.

Come in, Vega. We read you.

Professor Hartman, message from the Vega.

We request approval for landing of Kern, Sherman,

and robot in the auxiliary spacecraft.

They will seek a safe area on Venus to land.

I will keep the Vega in orbit, in order to ensure the

safe return of the Sirius with our men.

We feel it unnecessary to have to wait for the

arrival of the auxiliary.

This is Professor Hartman speaking.

Your plan is quite logical.

But I'm concerned about the possible psychological

danger to you in remaining too long on the Vega.

Get the psychological tests ready.

Well, I had expected to land with the others, but...

In view of the emergency situation, I feel this is a better plan.

Gene Curtis Harrington (September 17, 1926 – May 6, 2007) was an American film and television director whose work included experimental films, horror films, and episodic television. He is considered one of the forerunners of New Queer Cinema. more…

Voyage to the Prehistoric Planet