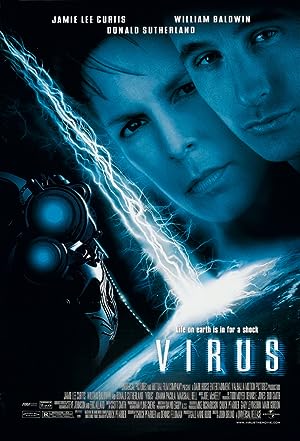 Synopsis: When a typhoon cripples their boat, the crew sails into the eye of the storm, where they discover a high-tech Russian communications and research vessel adrift. Only one Russian crew member is still alive, raving about "intelligent lightning." They soon discover that an alien life form has taken over the ship's computers and is churning out mechanical warriors. With their own boat destroyed, the crew must battle the creature as the ship reenters the storm.
Genre: Action, Horror, Thriller
Director(s): John Bruno
Actors: Jamie Lee Curtis, William Baldwin, Donald Sutherland, Joanna Pacula
Production: Universal

Put her back into the wind, Woods.

Captain, the barge|is taking on water.

I've seen her through worse than this,|so calm down and stand your station.

Once we're in the eye,|we'll have calm seas for two hours.

We can make repairs,|steady the barge.

Skipper, should I head for the eye ?

What the hell is goin' on up here ?

Then pump it out, mister.|You're the bloody engineer.

We can't get in. The bulkhead|took a hit, and the door's wedged tight.

Skipper, should I head for the breach ?|I need an answer now. I'm losin' her.

That barge goes down,|we go down with it !

- Stay away from that door, mister.

I mean, what's so precious|about your goddamn cargo, Captain ?

The cargo is mine.

I've leveraged everything|I own against it.

And it's not insured.

Christ, what's the matter|with those people ?

Let me tell you something.

You ever put a gun|in my face again--

You figure it out.

Sir, what about Foster's idea ?

I can reach the eye.

The water's coming in|faster than it's going out.

I can't believe we were stupid enough|to sign on with that guy again.

Maricon, ese got a gun on you, man.|I would've decked that son of a bitch.

He had us pullin' 500 tons of lumber|and steel, uninsured, in a typhoon,

And Woods tells me Foster|got tossed out of the Navy|for striking a superior officer.

I'll tell you one thing, Stevie.|It's the last time we make a move...

It was your idea.|What are you talking about ?

So does anyone|have any suggestions ?

- We got about four days of supplies.|- What is this ?

Hey, you buy this shit ?

There might be another ship|in the eye with us.

This is the Sea Star. We are 12 miles|northwest of your position.

So where the hell|is the captain ?

Skipper,|there's a ship in the eye with us.

Dead in the water,|about 12 miles out.

Dead in the water ?

I'll be there in a minute.