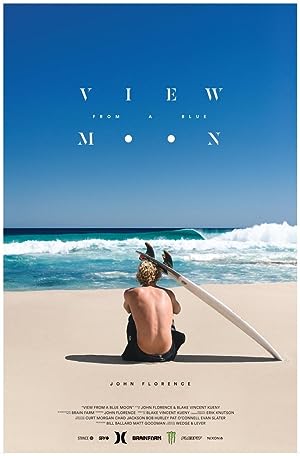 View From A Blue Moon

Synopsis: The first surf film shot in 4K, View From A Blue Moon follows the world's most dynamic surfer John Florence and his closest friends from his home on the North Shore of Oahu to his favorite surfing destinations around the globe. From the dreamy blue perfection of the South Pacific to the darkest uncharted waters of Africa (and everywhere in between), Florence faces a broad spectrum of emotions as he continues to seal his legacy as one of the most gifted surfers ever. And while the young Hawaiian is pulled in increasingly different directions, there is no form of pressure that will keep him from his ultimate goal - to redefine what is possible in the ocean.
Genre: Action
Director(s): Blake Kueny
Actors: Greyson Fletcher, Alex Florence, Ivan Florence, John Florence

The north shore of the Hawaiian island of Oahu is just over 2,400 miles from the west

coast of North America. The ocean floor rises five miles to the

shores of what people call, "The Seven Mile Miracle". It's home to some of the most amazing

water and sand in the world. What would it be like to be born on this island, to grow up on these shores, to witness this water everyday? You're about to meet someone who did. Here's John Florence and his birth certificate. He was born in Honolulu, on October 18th 1992. This is where John grew up, this is John's office, and this is a story about John John Florence. John John Florence or whatever

this illegal tree house to the authorities so it'll get chopped down. Another world-class surfer neighbor is Jamie. He and John were best of friends growing up. Jamie was an asshole. He tied my board to the top of a coconut

tree in his yard one time, and I was so bummed but Jamie was still

often into the night, everyday, ten hours a day. Or so he claims. One wonders when he has time to workout. I do not workout, I just surf. In 2014, John nabbed the number one

a less dangerous hobby. So, I originally started flying. I still had my pilot's license long before

I had my driver's license. So John was a world-class surfer and could fly before he could drive. Thank god you don't need a license to sail. This...is not John's boat. This is. John also plays the guitar. Ouch. This is John's film storage

fridge in his dark room. These are John's favorite cameras. I'll say I use this one the most. Already at 22 years old, John has countless stamps to remind him of the

many places he has been to, places that most only dream of. Um, sometimes I look back on the passport and,

yeah, it does make me reminiscence,

rem-remi...remember. So props to you, John, for living the dream, living our wildest dreams. Pipe dreams, wet dreams, sweet dreams,

hurry up and wait. I wonder if the road's as bumpy

-Enough size for it. -Look at this one.

-Oh, damn it. We meet in an hour of change and challenge, in a decade of hope and fear, in an age of both knowledge and ignorance. The greater our knowledge increases, the greater our ignorance unfolds. ...that all great and honorable actions are accompanied with great difficulties, and both must be enterprized and overcome with admirable courage. Many years ago, the great British explorer,

George Mallory, who was to die on Mount Everest, was asked why did he want to climb it. He said, "Because it is there." Well, space is there, and we're going to climb it. And the moon and the planets are there, and new hopes for knowledge and peace are there. And, therefore, as we set sail,

we ask God's blessing on the most hazardous and dangerous

View From A Blue Moon