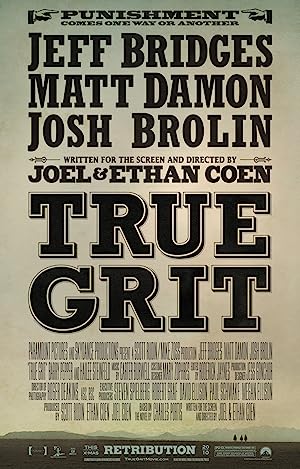 Synopsis: Following the murder of her father by hired hand Tom Chaney, 14-year-old farm girl Mattie Ross sets out to capture the killer. To aid her, she hires the toughest U.S. marshal she can find, a man with "true grit," Reuben J. "Rooster" Cogburn. Mattie insists on accompanying Cogburn, whose drinking, sloth, and generally reprobate character do not augment her faith in him. Against his wishes, she joins him in his trek into the Indian Nations in search of Chaney. They are joined by Texas Ranger LaBoeuf, who wants Chaney for his own purposes. The unlikely trio find danger and surprises on the journey, and each has his or her "grit" tested.
Genre: Adventure, Drama, Western
Director(s): Ethan Coen, Joel Coen
Actors: Jeff Bridges, Hailee Steinfeld, Matt Damon, Josh Brolin
Production: Paramount Pictures
Nominated for 10 Oscars. Another 37 wins & 153 nominations.

People do not give it credence that

a young girl could leave home

and go off in the winter time

to avenge her father's blood,

but it did happen.

I was just fourteen years of age when a coward

by the name of Tom Chaney shot my father down.

And robbed him of his life and his horse

and two California gold pieces that he carried

in his trouser band.

Chaney was a hired man.

And Papa had taken him up to Fort Smith

to help lead back a string of mustang ponies he'd bought.

In town, Chaney had fallen to drink

and cards, and lost all his money.

He got it into his head he'd been cheated

and went back to the boarding house

for his Henry rifle.

When Papa tried to intervene,

He could have walked his horse.

For not a soul in that city could

be bothered to give chase.

No doubt Chaney fancied himself scott-free.

But he was wrong.

You must pay for everything in this world,

one way or another.

There is nothing free.

Except the grace of God.

Is that the man?

That is my father.

it would be all right.

Why is it so much?

The quality of the casket.

And of the embalming.

And the chemicals come dear.

The particulars are in your bill.

If you'd like to kiss him it would be all right.

Thank you, the spirit has flown

You did not specify he was to be shipped.

It leaves nothing for our board.

Yarnell, you can see to the body's transport to

the train station and accompany it home.

I'll have to sleep here tonight.

I still have to collect father's things and

see to some other business.

Your Mama didn't say nothing about you

It is business Mama didn't know about. It's all right

Yarnell, I dismiss you.

I am not sure.

Tell mama not to sign anything until I return home

and see that Papa is buried in his mason's apron.

Your terms are agreeable, if I may pass the night here.

Here, among these people?

and train up your children in the way

that they should go!

You see what has become of me

I killed a man

in a trifiling quarrel over a pocketknife.

If I had received good instruction as a child

Could you point out the sheriff?

Him with the moustaches.

I would be with my wife and children today.

I do not know what is to become of them.

But I hope and pray that you will not slight

them and compel them to go into low company.

I killed the wrong man is the which-of-why I'm here.

Had I killed the man I meant to. I don't

believe I would a been convicted.

I see men out there in that crowd

is worse than me.

Naw, we ain't arrested him.

Ain't caught up to him, he lit

out to the Territory.

I would think that he has throwed in with

Well, why are you not looking for him?

I have no authority in the Indian Nation.

Tom Chaney is the business of the US marshals now.

When will they arrest him?

Not soon I'm afraid, the marshals are not well staffed.

And I'll tell you, frankly, Chaney is at the

end of a long list of fugitives and malefactors.

Could I hire a marshal to pursue Tom Chaney?

You have a lot of experience with

bounty hunters, do you?

That is a silly question. I am here

to settle my father's affairs.