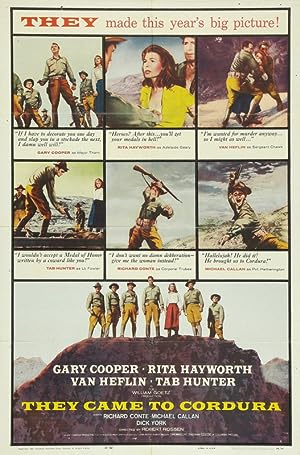 They Came to Cordura

Synopsis: After a cavalry charge during the 1916 U.S. "war against Pancho Villa," unheroic awards officer Tom Thorn (who is obsessed with the nature of courage) recommends 4 men for the Medal of Honor. He is ordered back to Cordura with them...and prisoner Adelaide Geary, gringo who sheltered the enemy. On the arduous journey, Thorn's heroes show a different face, and Thorn may have one last chance to prove he's no coward.
Genre: Adventure, Drama, History
Director(s): Robert Rossen
Actors: Gary Cooper, Rita Hayworth, Van Heflin, Tab Hunter
Production: Sony Pictures Home Entertainment
1 win & 1 nomination.

How far is Col. Rogers | from this ranch?

Does somebody claim Pancho Villa | might actually be there?

All we know is two | or three hundred Mexicans...

...attacked the town | of Carrizal yesterday.

Defeated the Mexican regulars | and then moved on to this ranch.

It's owned by an American woman.

If all she's got is a bullet through | the brain, she's luckier than most.

...over some of the wildest country | on earth.

You can me quote as saying that:

...has him completely surrounded. | On one side.

The major has been designated | as awards officer by General Pershing.

Weren't you the executive officer | of the 28th Calvary...

Then you were with Rogers when Villa | crossed the New Mexico border...

...and attacked the town of Columbus.

Your recommendation | for the Medal of Honor...

Been approved | by the War Department.

It came over the wire | several hours ago.

He was killed yesterday | in the fight at Guerrero.

I have another one with me. | A boy named Hetherington.

What he did was worth the medal. | I intend to recommend him for it.

Colonel, I would like to keep him | out of action and alive.

Until the medal is approved. | That's the least we can do.

Permission to send him back to base | at Cordura until we know?

His scouts confirm our reports.

Wants permission to force march | immediately and attack on sight.

Tell him to go ahead.

...at the base of the mountain | at Cusihuiriachic.

Does this order apply to anyone I may | want to recommend for the citation?

Don't you think it's a little unusual, | placing all this stress on awards?

I mean, appointing an officer | of field grade as awards officer...

...and allowing him to take men | out of action.

- Would you care to mention them? | - All right. Let me read you something.

The German bombardment of Verdun | continued for the 43rd day.

Gentlemen, our country is gonna need | an army soon. A big one.

With spirit to go with it.

In the meantime, it will have some | live heroes to think about.

Colonel, I'd like to do a story | on Major Thorn.

He's a sort of Homer on horseback. | Galloping around the country...

...looking for bravery in battles.

You want to go to General Pershing, | you'll get the same answer.

Now, from the top of the mountain | to the hacienda. How far?

Ask how many of Villa's men | passed through yesterday.

Ivan Romilly Moffat (18 February 1918 – 4 July 2002) was a British screenwriter, film producer and socialite who, with Fred Guiol, was nominated for an Academy Award for Best Adapted Screenplay for adapting Edna Ferber's eponymous novel into the film Giant (1956). Moffat was the grandson of actor-manager Sir Herbert Beerbohm Tree. After studying at the London School of Economics, Moffat became a socialite and began to make films to promote the war effort. During World War II he filmed activities of the US Army, meeting director George Stevens, whom he soon followed to Hollywood and assisted at Paramount Pictures. In the 1950s, between his two marriages, Moffat had a string of love affairs, notably with Elizabeth Taylor and Lady Caroline Blackwood. Beginning in 1956 he wrote or co-wrote screenplays for a number of well-known films, in addition to Giant, and in the 1970s wrote for television. more…

They Came to Cordura