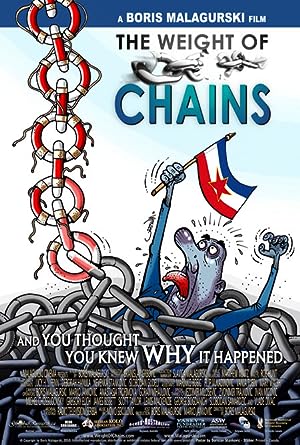 The Weight of Chains

Synopsis: The Weight of Chains is a Canadian documentary film that takes a critical look at the role that the US, NATO and the EU played in the tragic breakup of a once peaceful and prosperous European state - Yugoslavia. The film, bursting with rare stock footage never before seen by Western audiences, is a creative first-hand look at why the West intervened in the Yugoslav conflict, with an impressive roster of interviews with academics, diplomats, media personalities and ordinary citizens of the former Yugoslav republics. This film also presents positive stories from the Yugoslav wars - people helping each other regardless of their ethnic background, stories of bravery and self-sacrifice.
Genre: Documentary, History, News
Director(s): Boris Malagurski
Actors: Rade Aleksic, James Bissett, John Bosnitch, Michel Chossudovsky

I'm glad that there is complete agreement

in relation to progress towards European integration.

We have very ambitious plans.

We have a special minister for European integration in our government.

We are changing the face of our country to become a member of the European Union!

EU membership is our goal, our vision.

We want to be part of Europe.

want to be a colony and open community.

Who in their right mind could wish he could be a colony?

It was a culture in which people were on each other

they were worried about the welfare of people around them. That in America, for example, no more

people are alienated from each other. Just work, come home and watch TV at night.

And we watched television, and we even had a camera

I am pleased with the film as a kid,

always tried to hold in their hands.

What I really wanted was the camera that he kept.

When my mom took the camera that Dad can come

I changed the story.

I was a sneaky kid.

One of my favorite characters decijeg program, "Good night, kids."

Sometimes my parents to change the channel assembly

where he was even more lullabies.

And as I became too old for these kid stories

the more I looked forward flight, and every Yugoslav.

one month vacation with pay!

When I last had so many breaks ...

We, the Yugoslavs have to have every year.

But I had not noticed, I was too young during the communist Yugoslavia.

Now I know what you think.

It is an international criminal conspiracy!

Well, over the decades before the 1980s,

over 90% literacy, life expectancy of 72 years.

Most of the economy was in socially-owned, not the private sector.

Yugoslavia was a special case

in state ownership with workers' cooperatives

It was considered a success story of the socialist market

that was multi-ethnic society

who lived in harmony

and in many respects, Yugoslavia was a model of development.

You could say that there is something really special about this country.

And why are people so much blood spilled around it?

Who is to blame here?

Before I continue, let's see where we are?

Yugoslavia was between Greece, Italy, Romania

and was populated by Serbs, Croats, Bosnian Muslims, Slovenes and Macedonians

who are all Slavs, and there are Albanians, Hungarians and other minorities.

to show the world what they can achieve when working together

no matter what happened in the past.

Throughout history, this idea was a thorn in the side of many empires and world powers

The idea was that the Slavs do not should remain weak

Serbs lost the freedom percent of the Turks 1389th attacked ,

The loss of statehood, which lasted several centuries,

for the Serbs has produced a strong foundation myth of Kosovo.

Journalists come to Serbia and wonder: 'Why are you so crazy that Serbs celebrate a losing battle?

The Weight of Chains