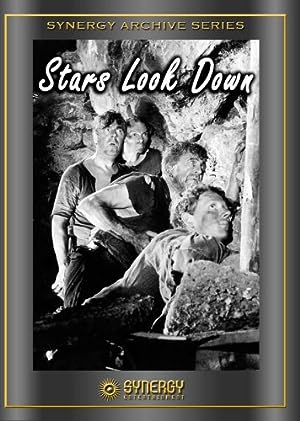 The Stars Look Down

Synopsis: Davey Fenwick leaves his mining village on a university scholarship intent on returning to better support the miners against the owners. But he falls in love with Jenny who gets him to marry her and return home as local schoolteacher before finishing his degree. Davey finds he is ill-at-ease in his role, the more so when he realises Jenny still loves her former boyfriend. When he finds that his father and the other miners are going to have to continue working on a possibly deadly coal seam he decides to act.
Genre: Drama
Director(s): Carol Reed
Actors: Michael Redgrave, Margaret Lockwood, Emlyn Williams, Nancy Price
Production: Grand National
1 win.

This is a story of simple working people,

such as there are the world over,

in all countries, at all times.

Here are their hardships, their humour

and, above all, their heroism.

The unconquerable heroism of men

who take heroism for granted,

as part of their daily lives.

Neither plaster saints or romantic rebels,

they live lives far from the limelight,

without publicity and with no spokesman,

save when some great crisis or disaster

lifts them into the headlines.

Yet these people are the backbone

of nations, the stuff of human destiny.

such as there are the world over,

in all countries and at all times.

Fenwick, do the men work tomorrow?

- Not on Scupper Flats, Mr Barras.

The union isn't being asked to work there.

There's a million tons of floodwater

ready to wash down on us.

You don't think I'd chance

flooding my own mine?

Show us the plans of the workings, then.

- There's two opinions on that.

It's you who've put the wind up the men.

- And the union should be backing us up.

This your lad who's after the university

The unions made the drill test. We

wouldn't send you down if it wasn't safe.

We all think Bob Fenwick's right!

- Nobody needs to go against the union.

- Better than being drowned!

- Know what you can do with the union.

- Make him show us the plans.

- I'll teach them a lesson.

I hear them sound their trumpets.

The angel sounds a great mountain

burning with fire cast into the sea.

The third part of the sea becomes blood.

Not water, my brethren, but blood.

'Tis not water that has brought us here,

but blood. I hear them sound their trumpets.

and then follows hail mingled with blood.

I got nothing for you today, Mrs Fenwick.

I've nought for you, Martha,

nor your good-for-nothing family.

No woman's ever had better sons

than mine, nor better man neither.

Maybe an empty belly will make him

think twice before calling a strike.

- He had good reasons.

Bringing misery on the whole town.

You go back and tell him.

I'll have no begging around my shop.

of these cadgers mooching round.

Sitting up all night, stuffing your head

with the high-faluting rubbish.

You and your scholarships.

If you don't know enough now to pass

Why don't you go for a walk up the field?

Did you say breakfast?

That's what I call a feed.

I'll just have a piece of that bread.

You're lucky to get anything

Isn't every man who can scare miners

about a bit of water,

get them to strike against the unions.

My father wasn't so clever,

nor my grandfather. They was just men.

They were daft enough

to think of their own families.

Your father's cleverer than that, Hughie.

He can see through solid coal

to the floodwater t'other side of it.

Mr Barras and the union can't find that

Discuss this The Stars Look Down script with the community:

The Stars Look Down