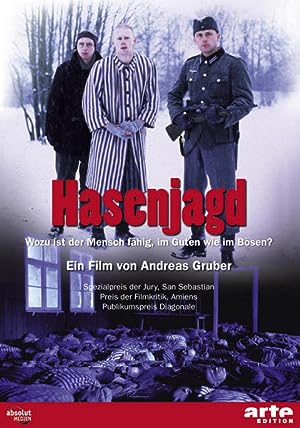 Synopsis: It is the beginning of 1945 during WW2 in former Austria. 500 Russian prisoners of war who have refused to fight on the side of the Germans against their country were moved to the concentration camp in Mauthausen awaiting execution. They decide to break out. One winter night the Russian prisoners make an escape. During the following shooting a great number of them gets killed. Some, however, succeed to hide in nearby villages. But the German Nazis convince the inhabitants of the villages to hunt the prisoners "like rabbits".
Genre: Drama, War
Director(s): Andreas Gruber
Actors: Elfriede Irrall, Rainer Egger, Oliver Broumis, Merab Ninidze
1 win & 2 nominations.

Andreas Gruber (born 2 November 1954) is an Austrian screenwriter and director of both television and film. From 1974 to 1982 he studied screenwriting and directing at the Hochschule für Musik und darstellende Kunst in Vienna. In 1979 he was directing assistant to Axel Corti. In 2000 he won the Golden Romy for best directing. His 2004 film Welcome Home was entered into the 27th Moscow International Film Festival. He teaches at the University of Television and Film (HFF) Munich, Germany. more…