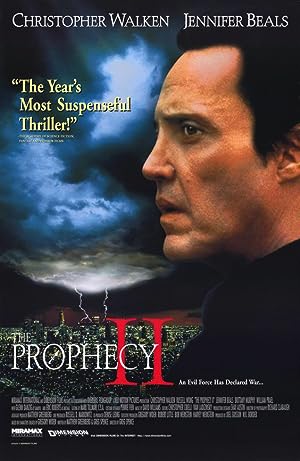 Synopsis: Gabriel returns to Earth to prevent the birth of a child conceived by one of his kind (the Angel Danyael) and one of God's "monkeys" (a human woman - Valerie). The coming of this child has been prophesied by a monk, Thomas. When the Angel Danyael kills members of Gabriel's army of angels, Gabriel instead employs the assistance of a teenage girl (Izzy) who has just committed suicide. Gabriel keeps her alive to assist him in his war against Danyael and the other angels which climaxes in a battle in Eden.
Genre: Fantasy, Horror, Thriller
Director(s): Greg Spence
Actors: Christopher Walken, Russell Wong, Jennifer Beals, Brittany Murphy
Production: Miramax
1 nomination.

"Lord, blind my eyes|to these visions...

and deafen my ears|to the screams.

For I have seen legions|of God's army fall...

for what I see is the coming end|of the Kingdom of Heaven.

And watch over us, Lord.

For Heaven's war|has come to Earth".

It's five past the hour,

and that means a quick look|at today's weather.

This morning, San Fernando valley|residents got a surprise...

when they found frost|on their windshields.

But things will be|warming up this afternoon.|The gusty winds will be dying down.

As far as traffic is concerned,|the SIG alert we had this morning,

reported northbound on the 405|at Sunset, is still backing things up.

- We'll have to wait|while authorities...

- What time is it?|I'm coming. I'm coming.|- investigate that situation.

Southbound on the 405 has normal|slowing. However, it has snagged up...

Contusions to the head|and neck. Clear this hallway!

People, get out of the way.|Are you okay?

- He was just there.|- How fast were you going?

We'll take it from here, Val.|Thanks.

He's coming for me!

- I tried to open the door,|but he locked it.

He's coming for you.

It's time for you|to go, Gabriel.

and Hell isn't big enough|for both of us.

How are you feeling?

I don't know if you remember me.

- I could've killed you.|- Take a lot more than that to kill me.

The monkeys|never did get that one right.

It's not "willing servants of Heaven".|It's "winged".

So, you found me.

This place looks lived in.

What do you do?

You write them down|on a-a scroll...

I know you prophets|enjoy doing that.

I know you've|seen her, Thomas.

An archangel needs a monkey|to get a vision from God.

Can you take it?

Well, I hope you don't mind.|I had this dry-cleaned.

I figured it was|the least I could do.

You don't have to keep|apologizing, Valerie.

Yeah, well, you don't have|to keep forgiving me either.

It's in my upbringing.

How would you feel|about seeing me again?

- Most of the kids|in the ward are terminal.

I mean, I used to spend|a lot of time hoping and hoping.

And then I just stopped.

It makes you wonder|what the point is.

And what do you think|the point is, Valerie?

- Four hundred and seventy-two|dollars a week, plus benefits.

Wonder if it should|make me sad too.

Gregory Widen is an American screenwriter and film director. He is the creator of the Highlander film and television franchise, and the writer-director of the cult horror film The Prophecy. more…