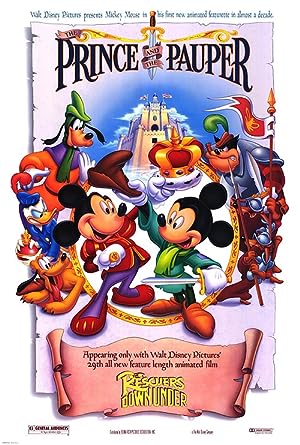 The Prince and the Pauper

Synopsis: Long ago in a land with an ailing king, there was a pair of boys who looked exactly alike, a pauper called Mickey and the other, the Crown Prince. Mickey dreamed of plenty and an easy life as Royalty and the Prince dreamed of the freedom as a subject. Happenstance throws them together and their mutual resemblence inspires the pair to switch identities to see how the other lives. To their surprise, Mickey learns of the duties and responsibilties of royalty while the Prince learns to his horror that the Royal Captain of the Guard has taken advantage of the existing power vacuum to inflict brutal tyranny on the subjects. Now the Prince must react to this evil, unaware that the Captain knows about the identity swap and is using it to his own advantage while dominating Mickey who play the Heir to the Throne.
Genre: Adventure, Animation, Short
Director(s): George Scribner
Actors: Wayne Allwine, Bill Farmer, Arthur Burghardt, Tony Anselmo
Production: Walt Disney Pictures

and the people flourished|and were very happy...

and a darkness fell over|the countryside.

As the king grew weaker...

his captain of the guard.|a ruthless and greedy man...

saw his chance to terrorise|the people of England...

and worst of all.|in the king's name.

It seemed that no one could|save the kingdom of England...

from the thieving captain|and his ruthless henchmen...

You can't cook dinner|without a fire, can you, sir?

All kinds, sir.|We got plain, mud, and twig.

I'll have to eat them myself.

One of these days,|we'll eat just like the king...

with lots of turkey and ham|and potatoes and corn.

Fruit tarts and cobblers|piled this high.

# Next to the fireplace #

# It would be appealing #

# To have that royal feeling #

# He's the vilest villain|that you'd ever want to meet #

Who goes there.|and what do you want?

Gosh, I just want|to get my dog back.

He ran in before|I could catch him.

Your Majesty, do come inside.

What do you think this is,|open house?

Then who's that, numskull?

and the relations|between these sides...

are known as ratios.

Sire, if you could give me|your full attention.

that I don't find|your behaviour amusing at all.

If the prince is to assume|the royal duties...

No! He started it!

I'm always getting in trouble|for that stupid prince.

And as for you,|Your Highness...

you know|that your father is ill...

and requires rest and quiet.|Now, sire...

Beat it, you dumb mutt!

Get out of here!|Let go of my leg!

Captain! What's the meaning|of this outburst?

Have him brought to me at once.

The prince wishes to see you.

What the devil's|going on out here?

Now, who are you?|And who is your tailor?

Well, Mickey, I must thank you|for saving my life.

I was about to die of boredom when you interrupted my lesson.

Gerrit Graham (born November 27, 1949) is an American stage, television, and film actor as well as a scriptwriter and songwriter. He is best known for his appearances in multiple films by Brian De Palma as well as appearances in two different Star Trek series. more…