Synopsis: he Possession is a 2012 American supernatural horror film directed by Ole Bornedal and produced by Sam Raimi. It was released in the US on August 31, 2012, with the film premiering at the Film4 FrightFest. The story is based on the allegedly haunted dybbuk box. Bornedal cited films like The Exorcist as an inspiration, praising their subtlety.
Genre: Horror, Thriller
Actors: Jeffrey Dean Morgan, Kyra Sedgwick, Natasha Calis, Madison Davenport
Production: Lionsgate Films
6 nominations.

Moonlight. A magical forest of trees. Diamond shards of

blue light on wrinkled, wormy roots. Over the mossy gorse,

A little TAILOR, with scissors, needles and thread hanging

from his belt. A glass key round his neck. And a tall,

grey hound beside him. He sees ahead -

A giant stone, where a crack opens up. The Tailor peers

inside. And squeezes down inside a dark tunnel. Which

A shimmering hall of phosphorescent light. The Tailor sees

a tall glass dome; and a shining glass coffin, on a velvet

pall, surrounded by moths and butterflies.

The Tailor peers inside the glass dome, sees -

A miniature castle, with windows and battlements.

FROM POV - INSIDE GLASS COFFIN

The Tailor peers in, to see: a sleeping PRINCESS, her

breath ruffling her golden hair. In her hands: a box, like

The Tailor -- takes his glass key, slips it into the lock.

`... And the little tailor thought

to bend and kiss her perfect cheek,

because he knew this was what he

And kisses the Princess. She opens her eyes, full of

You must be the one I have been

waiting for. You must be the

No, you are mistaken. I am a

tailor. In search of work to keep

The Princess laughs. And the sound of her laughter SHATTERS

the GLASS COFFIN into splinters. And on the box, CLOSE IN

`... I am the resurrection and the

life,' said Jesus. `He that

believeth in me, though he were

SLOW FADE UP TO a silvery BLACK AND WHITE -

The box lies in the hands of a widow, MRS. ELLEN ASH, in

front of a mausoleum. It's a dripping November day, sun low

Ellen lifts back her veil to kiss the box. Which she places

inside -- a wrought iron vault. Its doors close.

Let the body and soul of Randolph

mourned by his sorrowing widow

PULL BACK to see Ellen and mourners, men in black hats and

tomb. Ellen focuses on the box behind a metal grille. HOLD

As before our eyes, the box and tomb rapidly -

leaves, briars, tendrils of undergrowth push and coil 'round

... honored not only by those of the

And as a wind blows leaves, FADE UP TO -

The spinning wheel of a bicycle. The spokes blur in

a constant motion, giving an illusion of stillness.

A young man weaves perilously 'round a worm of traffic. In

down back streets, cutting through into -

Roland wheels his bicycle to sheds, removes his clips.

Oblivious to his trousers splashed by mud. He unpacks his

bicycle panniers. Heads through a side entrance into!-

Roland walks down a long corridor, leading through to an

ECHOING domed hall. He pauses by a party of TEACHER and

school-kids in front of a statue of an eminent Victorian:

Roland stares fondly up at the stern features of Ash gazing

lifelessly out over the kids' bored faces. 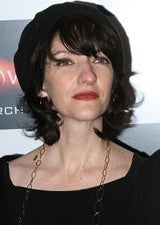 Juliet Snowden is an American screenwriter, film director, and producer, best known for writing Knowing and Ouija. She is also known for co-writing screenplays with her husband Stiles White. more…