Synopsis: 1930's Pittsburgh, a brother comes home to claim "my half of the piano", a family heirloom; but his sister is not wanting to part with it. This is a glimpse of the conditions for African-Americans as well as some of the attitudes and influences on their lives. But whether he is able to sell the piano so that he can get enough money to buy some property and "no longer have to work for someone else" involves the story (or lesson) that the piano has to show him.
Genre: Drama, Music
Director(s): Lloyd Richards
Actors: Charles S. Dutton, Alfre Woodard, Carl Gordon, Tommy Hollis
Production: Republic Pictures Home Video
Nominated for 1 Golden Globe. Another 4 wins & 11 nominations.

The voice you hear is not my

speaking voice, but my mind's

I have not spoken since I was

six years old. No one knows

why, not even me. My father

says it is a dark talent and

the day I take it into my head

to stop breathing will be my

Today he married me to a man

I've not yet met. Soon my

daughter and I shall join him

in his own country. My husband

said my muteness does not

bother him. He writes and hark

so why not he!

Were good he had God's patience

for silence affects everyone in

the end. The strange thing is I

don't think myself silent, that

is, because of my piano. I

shall miss it on the journey.

A woman in a dark crepe Victorian dress sits leaning against a tree,

her hands cover her face, around her neck she wears a writing pad. She

crosses a field with large bare trees, in the far background stands a

A small girl roller skates down a dimly lit corridor. A parlour maid

looks down the hall where the girl has disappeared.

piano. On one of the men's arms is a tattoo of a whale in a wild sea.

The girl wearing her skates sits on a small black pony. An old man is

pulling it, but it won't move. (In the background, another aspect of

bed. She is still wearing her skates. The woman cuts through the laces

and removes the boots. One disembodied skate rolls across the room.

The woman stands at a window lit by moonlight. Her skin appears

luminescently white. She touches the wooden window frame, the curtain,

the objects on the window sill, her mind abstracted, her hands

unconsciously performing a farewell. Turning from the window she moves

to a square piano crowded by packing boxes. In the dim light she

begins to play strongly. Her face strains, she is utterly involved,

unaware other own strange guttural sounds that form an eerie

accompaniment to the music.

An old maid in night-dress looks in. Abruptly the woman stops playing.

The emotion leaves her face, it whitens and seems solid like a wall.

Under water a long boat passes overhead, its oars breaking the

Amidst a riotous sea a woman, ADA, is carried to shore on the

shoulders of five seamen. Her large Victorian skirt spreads across the

men's arms and backs, on her head a black bonnet, around her neck her

pad and pen. We should be forgiven if this woman seems a sacrificial

offering as the bay they carry her to is completely uninhabited. A

black sand backs on to an endless rise of dense native bush. 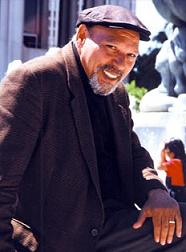 August Wilson was an American playwright whose work included a series of ten plays, The Pittsburgh Cycle, for which he received two Pulitzer Prizes for Drama more…