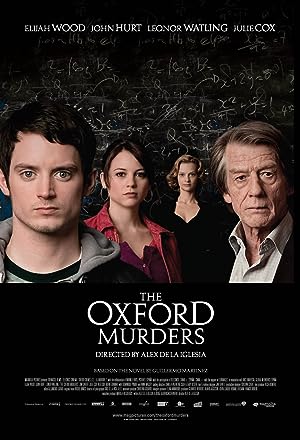 Synopsis: Martin, a PhD student in mathematics, enrolls at Oxford in the hope of meeting his mentor, Professor Seldom. The young man manages to find lodging at Mrs. Eagleton's but in this house a stifling atmosphere prevails due to the landlady's attitude. Indeed Mrs. Eagleton, who happens to be a friend of Seldom's, is a haughty and unsympathetic woman who also stifles her daughter Beth. At the university, things do not fare much better as Martin is put in his place by his idol during one of Seldom's lectures. But his private life changes for the best as he starts an affair with Lorna, a beautiful girl he met during a game of squash. One night Seldom and Martin who find themselves at Mrs. Eagletons's discover her dead body. They are interrogated by the police. Soon afterwards they decide to lead their own private investigation...
Genre: Crime, Mystery, Thriller
Director(s): Álex de la Iglesia
Actors: Elijah Wood, John Hurt, Leonor Watling, Julie Cox
Production: Magnolia Pictures
6 wins & 5 nominations.

He's writing in a notebook!

That man was not mad.|He was working

with shrapnel whistling round him|because he couldn't wait.

The contents of that notebook|were too important

to write it down later.

He had to do it|when his mind dictated,

What was so important that|he would risk his life for it?

What was he writing that|stopped him from standing up

the most influential philosophical|work of the twentieth century.

That soldier was called|Ludwig Wittgenstein,

the man who set the limits|on our thoughts.

The enigma that|he tried to decipher

Can we know the truth?

All the great thinkers|throughout history

have sought a single certainty,

something which|no one can refute,

In order to find that truth,

mathematical logic. What better|means of obtaining a certainty

than an immutable language,|free from the passions of men?

He advanced slowly,|using equation after equation,

with impeccable method,|until he reached

There is no such truth

There is no way of finding

Because "Whereof we cannot speak,

thereof we must be silent."

This is an Enigma machine!

Sorry to sneak in like that...|The door was open.

Of course it was open. You surely|didn't expect me to get up

and let you in|on these legs, did you?

the man who deciphered|the Enigma code.

Thanks to him, we won the war.

And the one on the left?

He deserved a bloody Nobel prize,|but he hated sucking up

He never had many friends.

He had one at least.|Arthur Seldom.

after day in the house,|tidying Harry's papers.

He'd go without lunch or dinner,|going over the equations.

Eagleton tutored his doctoral thesis|on the logical series. In 1960,

I know everything there is|to know about Arthur Seldom.

In fact, Mrs. Eagleton,|it's because of him that I'm here.

In Oxford, I mean.

I know what you mean.|Seldom is... unique.

he's received over the years|has been a real joy for me.

After daddy died,|you tried to marry him.

How dare you!|That's not true.

He's always been|like a brother to me.

Only because there was no chance|of him being anything else.

There's no doubt|Professor Seldom is a genius,

but there's one area|he's no different from other men.

Beth, darling, couldn't you stop|being so spiteful just for a second?

Take no notice of us.|We're like two bitter old spinsters.

Thank you, mother, for tarring me|with the same brush.

I sent a fax a few weeks ago,|about renting a room.

Alejandro "Álex" de la Iglesia Mendoza (born 4 December 1965) is a Spanish film director, screenwriter, producer and former comic book artist. De la Iglesia's films combines grotesque and very dark elements such as death and murder: most of his work is considered dark comedies, but are also often considered to have horror and/or drama elements. All his films, with the notable exceptions of The Last Circus (2010) and As Luck Would Have It (2011), were written together with Jorge Guerricaechevarría. more…

Discuss this The Oxford Murders script with the community: