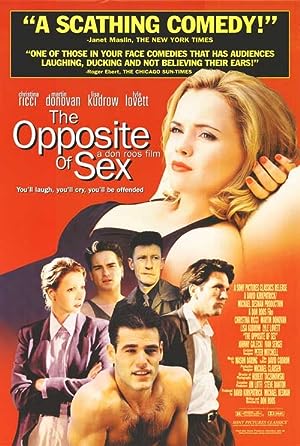 Synopsis: A 16 year old Louisiana girl moves in with her homosexual half-brother and immediately starts coming on to his sexual partner, finally forcing him into an affair in which she becomes pregnant. The whole affair blows into a scandal exposing her school teacher brother and the true parent of the child is called into question as it is revealed that there have been a series of lovers.
Genre: Comedy
Director(s): Don Roos
Actors: Christina Ricci, Martin Donovan, Lisa Kudrow, Lyle Lovett
Production: Sony Pictures Classics
Nominated for 1 Golden Globe. Another 14 wins & 23 nominations.

What is the matter with you?|Why aren't you dressed yet?

You better get in there, missy,|and wear what I put out for you.

Do you hear me?

I'm not about to have you show up|in that crap you wear to school.

This isn't just any old day|of the week, you know.

You're gonna show me and your stepfather|some respect for once in your life.

If you're one of those people|who don't like movies...

where some person you can't see|talks the whole time...

and covers up all the holes|in the plot and...

at the end says, "I was never the same|after that summer"...

or whatever, like it was so deep|they can't stand it...

then you're out of luck. Things get|very complicated here very quick.

And my guess is you're not gonna be|up to it without me talking.

My name is Dedee Truitt.

My mother was the kind of mother|who always said...

she was her|daughter's best friend.

Whenever she did, I thought, great,|not only do I have a shitty mother...

but my best friend's a loser|b*tch.

Dedee, honey, put the dirt on like I|told you how to.

She was all over me the day we|buried my stepfather.

That's not what I said!|What are you doing?

To get cancer of the ass was,|like, poetic.

Almost as good as cancer|of the dick... if they have that.

I had to get out of there.

Look around. Wouldn't you?

This part where I take the gun is,|like, important.

It comes later, but I'm putting it|in here for foreshadowing.

Which we covered when we did Dickens.

If you're smart, you won't forget|I've got it.

Randy was a geek, but he was nicer|than a lot of the guys...

mostly because he was born with|only one ball.

And he was pretty nice to anyone who'd|sleep with him and not make fun of it.

- Go!|- You had to ignore the Christian stuff.

I told him I was going to my|grandma's in Memphis.

But where I was really going was|Indiana to see my brother Bill...

who was really only my|half-brother...

and who I'd seen once before|when I was a kid when my real dad died.

which is kind of gross, I mean,|the combo.

But he had a lot of money from his|last boyfriend who died of AIDS.

And I needed a place to get my|sh*t together.

If you think I'm just plucky and|scrappy and all I need is love...

you're in over your head.

I don't have a heart of gold,|and I don't grow one later, okay?

There's other people a lot nicer|coming up.

We call them losers.

Are you one of his students?

I gotta call you back.

I didn't know he had a sister.

Can I come in? I'm a real relation.

You holding up the wall there, Joe?

No, I just can't go if anybody's|around.

There's a sentence here that's a|fragment. What is it?

Every Tuesday after Yearbook here?

Now how would you fix that?

I guess you could say,|Mr. Truitt blanks it hard...

Or just Tuesdays after Yearbook.

You don't need the every, right?

Probably not a good idea to use your|real name.

- She took a bus.|- Can you believe this place?