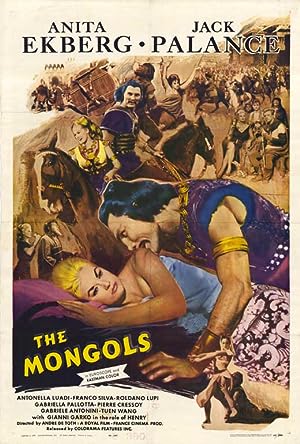 Synopsis: Genghis Khan and his Mongol army invade Poland and lay siege to the city of Cracow. The Polish king tries to make peace in order to save his city, and Genghis Khan seems amenable to that. However, his son Ogotai is itching for war, and his mistress eggs him on to defy his father and take the city.
Genre: Action, Adventure, Drama
Director(s): André De Toth, Leopoldo Savona, Riccardo Freda
Actors: Jack Palance, Anita Ekberg, Antonella Lualdi, Franco Silva

after the year 1000 Ford of invincible

desert is advancing toward the frontiers

of Europe spreading death they are led

by overtime son of Jenga Scott

it is to the king of Poland that our

hopes turn today we must stand up to the

Mongol hordes or all of Europe will be

destroyed a war would ruin us you'll

find out and how do you think we can

save ourselves without going to battle

why does the Duke of Bohemia state

clearly that what he fears is the

demonstration of his homeland and so the

Mongolian cavalry once across the Danube

will also invade the cities of the Duke

of Bavaria true but I will defend them

with every drop of my blood and although

enough cowards will help me stand my

ground my Lords my Lords I beseech you

in front of his majesty if we do not

have unity among ourselves how can we

even think of fighting this menace war

will unite us order our armies to

assemble and move against the enemy

nobody can conquer them

they have annihilated the great Chinese

Empire and have destroyed all of the

lands of Asia no one has ever stopped

the cavalry of jenga Scott there's the

truth one must fight fire with fire

a river floods you strengthen its

embankments and against the Mongols

funeral weapon to use other than our

soldier to express an opinion stirring

of Kharkov never yet defeated in battle

reaches peace how can you speak in such

a cowardly way because I have fought I

hate war without fearing it we have an

obligation the lives of our people must

not depend on the results of a battle we

must not listen to him I appeal to your

honor to our justice until conscience

Majesty may I present a site which will

bring these useless words to a stop

they come from the cities which have

been devastated by the Mongols the

people whom God has entrusted to you and

whom you would abandon to the enemy oh

you speak of peace I offer all actresses

to these our problem but if we act we

can save the rest have an ambassador go

see the Mongols Genghis Khan is not only

a soldier he is wise to and our way to

entrust the destiny of our people to

reasoning power while arms obscure it

my Lords step on a crack up has asked

about conscience of proof of trust that

destruction I named you ambassador go to

the Mongols with our offer of peace if

you have not returned by the time of the

full moon we shall attack the army of

jenga's Khan knowing we have done

everything possible to avoid war

I think they'll respect our ambassador

after all our proposals are very sincere

I hope so Prince only why did you want

to accompany me on this mission what a

nephew of the king of France must always

be courageous and so I had to come along

the minute I know we'll cap that sister

we are going to ask what bees

you coward you kill a helpless man who

I hit will not cry

lay down your lashes in the name of the

king of Bullen we go to speak to Jenga

Scott I am Stefan of Gothel to us that

one of cock off

Thank You ha me did you run away it's

alright put it down

so they'll fill it one day and then one

day we shall destroy Krakoff and there

will be no obstacles to living see