Synopsis: Thomas A. Anderson is a man living two lives. By day he is an average computer programmer and by night a hacker known as Neo. Neo has always questioned his reality, but the truth is far beyond his imagination. Neo finds himself targeted by the police when he is contacted by Morpheus, a legendary computer hacker branded a terrorist by the government. Morpheus awakens Neo to the real world, a ravaged wasteland where most of humanity have been captured by a race of machines that live off of the humans' body heat and electrochemical energy and who imprison their minds within an artificial reality known as the Matrix. As a rebel against the machines, Neo must return to the Matrix and confront the agents: super-powerful computer programs devoted to snuffing out Neo and the entire human rebellion.
Genre: Action, Sci-Fi
Director(s): Lana Wachowski, Lilly Wachowski
Actors: Keanu Reeves, Laurence Fishburne, Carrie-Anne Moss, Hugo Weaving
Production: Warner Bros. Pictures
Won 4 Oscars. Another 34 wins & 48 nominations.

so close it has no boundaries.

A blinding cursor pulses in the electric darkness like aheart coursing with phosphorous light, burning beneaththe derma of black-neon glass.

A PHONE begins to RING, we hear it as though we weremaking the call. The cursor continues to throb,

Data now slashes across the screen, information flashingfaster then we can read: "Call trans opt: received.

Is everything in place?

We listen to the phone conversation as though we were ona third line. The man's name is Cypher. The woman,

I said, is everything in place?

The entire screen with racing columns of numbers.

Shimmering like green-electric rivers, they rush at a10-digit phone number in the top corner.

You weren't supposed to relieve

The area code is identified. The first three numbers

We begin MOVING TOWARD the screen, CLOSING IN as eachdigit is matched, one by one, snapping into place likethe wheels of a slot machine.

We're going to kill him. Do you

understand that? He's going to

Morpheus believes he is the One.

If you have something to say, I

suggest you say it to Morpheus.

I intend to, believe me. Someone

The final NUMBER POPS into place -

Did you hear that?

Are you sure this line is clean?

We MOVE STILL CLOSER, the ELECTRIC HUM of the greenNUMBERS GROWING into an ominous ROAR.

She hangs up as we PASS THROUGH the numbers, entering thenether world of the computer screen. Suddenly, a flashlight

cuts open the darkness and we find ourselves in -

The hotel was abandoned after a fire licked its wayacross the polyester carpeting, destroying several roomsas it spooled soot up the walls and ceiling, leavingpatterns of permanent shadow.

We FOLLOW four armed POLICE OFFICERS using flashlights asthey creep down the blackened hall and ready themselveson either side of Room 303.

The biggest of them violently kicks in the door. The other

cops pour in behind him, guns thrust before them.

The room is almost devoid of furniture. There is a fold-

up table and chair with a phone, a modem, and a powerbook

computer. The only light in the room is the glow of the

Sitting there, her hands still on the keyboard, isTRINITY; a woman in black leather.

Hands behind your head! Now! Do

She slowly puts her hands behind her head.

JONES get out of the car.

They wear dark suits and sunglasses even at night. Theyare also always hardwired; small Secret Service earphonesin one ear, the cord coiling back into their shirtcollars. 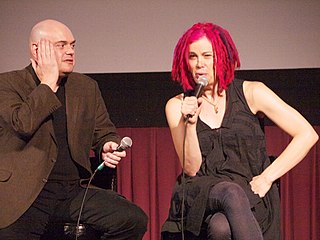 Lana Wachowski (formerly Laurence "Larry" Wachowski, born June 21, 1965) and Lilly Wachowski (formerly Andrew Paul "Andy" Wachowski, born December 29, 1967) are sibling American film directors, screenwriters, and producers. They are both openly transgender women. Known together professionally as The Wachowskis and formerly as The Wachowski Brothers, the pair made their directing debut in 1996 with Bound, and reached fame with their second film The Matrix (1999), a major box office success for which they won the Saturn Award for Best Director. They wrote and directed its two sequels: The Matrix Reloaded and The Matrix Revolutions (both in 2003), and were deeply involved in the writing and production of other works in the franchise. more…