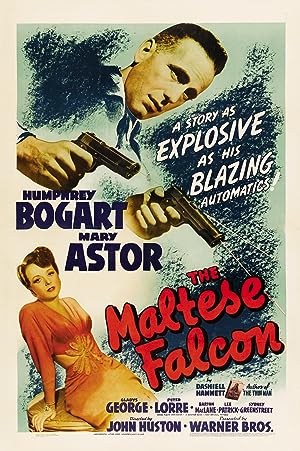 Synopsis: Spade and Archer is the name of a San Francisco detective agency. That's for Sam Spade and Miles Archer. The two men are partners, but Sam doesn't like Miles much. A knockout, who goes by the name of Miss Wonderly, walks into their office; and by that night everything's changed. Miles is dead. And so is a man named Floyd Thursby. It seems Miss Wonderly is surrounded by dangerous men. There's Joel Cairo, who uses gardenia-scented calling cards. There's Kasper Gutman, with his enormous girth and feigned civility. Her only hope of protection comes from Sam, who is suspected by the police of one or the other murder. More murders are yet to come, and it will all be because of these dangerous men -- and their lust for a statuette of a bird: the Maltese Falcon.
Genre: Film-Noir, Mystery
Director(s): John Huston
Actors: Humphrey Bogart, Mary Astor, Gladys George, Peter Lorre
Production: Warner Bros.
Nominated for 3 Oscars. Another 4 wins.

John Marcellus Huston (; August 5, 1906 – August 28, 1987) was an Irish-American film director, screenwriter and actor. Huston was a citizen of the United States by birth but renounced U.S. citizenship to become an Irish citizen and resident. He returned to reside in the United States where he died. He wrote the screenplays for most of the 37 feature films he directed, many of which are today considered classics: The Maltese Falcon (1941), The Treasure of the Sierra Madre (1948), The Asphalt Jungle (1950), The African Queen (1951), The Misfits (1961), Fat City (1972) and The Man Who Would Be King (1975). During his 46-year career, Huston received 15 Oscar nominations, won twice, and directed both his father, Walter Huston, and daughter, Anjelica Huston, to Oscar wins in different films. Huston was known to direct with the vision of an artist, having studied and worked as a fine art painter in Paris in his early years. He continued to explore the visual aspects of his films throughout his career, sketching each scene on paper beforehand, then carefully framing his characters during the shooting. While most directors rely on post-production editing to shape their final work, Huston instead created his films while they were being shot, making them both more economical and cerebral, with little editing needed. Most of Huston's films were adaptations of important novels, often depicting a "heroic quest," as in Moby Dick, or The Red Badge of Courage. In many films, different groups of people, while struggling toward a common goal, would become doomed, forming "destructive alliances," giving the films a dramatic and visual tension. Many of his films involved themes such as religion, meaning, truth, freedom, psychology, colonialism and war. Huston has been referred to as "a titan", "a rebel", and a "renaissance man" in the Hollywood film industry. Author Ian Freer describes him as "cinema's Ernest Hemingway"—a filmmaker who was "never afraid to tackle tough issues head on." more…