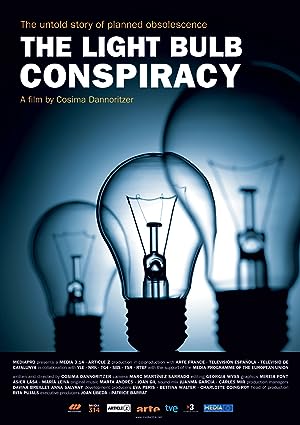 Synopsis: Once upon a time..... products were made to last. Then, at the beginning of the 1920s, a group of businessmen were struck by the following insight: 'A product that refuses to wear out is a tragedy of business' (1928). Thus Planned Obsolescence was born. Shortly after, the first worldwide cartel was set up expressly to reduce the life span of the incandescent light bulb, a symbol for innovation and bright new ideas, and the first official victim of Planned Obsolescence. During the 1950s, with the birth of the consumer society, the concept took on a whole new meaning, as explained by flamboyant designer Brooks Stevens: 'Planned Obsolescence, the desire to own something a little newer, a little better, a little sooner than is necessary...'. The growth society flourished, everybody had everything, the waste was piling up (preferably far away in illegal dumps in the Third World) - until consumers started rebelling... Can the modern growth society survive without Planned Obsolescence? Did th
Genre: Documentary
Director(s): Cosima Dannoritzer
Actors: Molly Malcolm, Marcos López Merayo, Lynn Owens, Richard Jones
2 wins & 3 nominations.

This is Marcos from Barcelona. But he can be anyone, anywhere.

A part inside the printer has failed, and the manufacturer sends Marcos to Technical Support

A technician can make a diagnosis but it costs 15 euros plus VAT.

It has become difficult to find parts for this.

It's not worth repairing.

Printers cost as low as 39 euros.

I would advise you buy a new printer.

It's best to buy a new one.

If he agrees, Marcos will become yet another victim of planned obsolescence

The secret mechanism at the heart of our consumer society

Our role in life seems to be just to consume things with credit, to borrow money to buy things we don't need

We live in a society dominated by a growth economy

whose logic is not creating because we need things, but just for the sake of it

If the consumer does not purchase, the economy is not going to grow

Planned obsolescence -- the desire on the part of the consumer

to own something a little newer, a little sooner than is necessary

This film will reveal how planned obsolescence

has defined our lives ever since the 1920s

when manufacturers started shortening the lives of products

they time those things, they time them, so when you finally pay them, they're used up

A new generation of consumers have started challenging manufacturers

Is it possible to design an economy without planned obsolescence?

-- without its impact on the environment?

Welcome to Livermore, California, home of the longest burning light bulb in the world.

In 2001, when the bulb was 100 years old, the people of LIvermore threw a big birthday party -

I think we were hoping if we could get 200 people, we will be happy and we've ended up with 900 showing up

You think that anybody would sing "Happy Birthday" to a light bulb,

well, we didn't think they would, but they did

and some gentlemen that have invested in the company

The filament was invented by Adolphe Chaillet,

He invented his filament to last.

Why does his filament last? I don't know. It's a secret that he made and it died with him.

Chaillet's formula for a long-lasting filament is not the only mistery in the history of the light bulb.

A much bigger secret is how the humble lightbulb became the first victim of planned obsolescence.

Christmas Eve 1924 was a special day.

In a backroom at Geneve suit wearing men met to create a secret plan.

They established the first worldwide cartel.