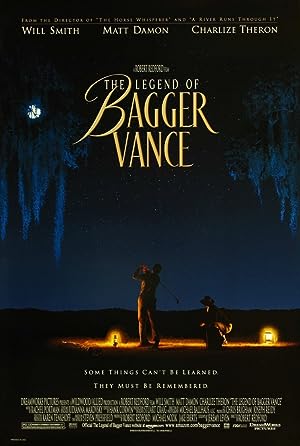 The Legend of Bagger Vance

Synopsis: A disillusioned war veteran, Captain Rannulph Junuh, reluctantly agrees to play a game of golf. He finds the game futile until his caddy, Bagger Vance, teaches him the secret of the authentic golf stroke which turns out also to be the secret to mastering any challenge and finding meaning in life.
Genre: Drama, Fantasy, Sport
Director(s): Robert Redford
Actors: Will Smith, Matt Damon, Charlize Theron, Bruce McGill
Production: DreamWorks SKG
2 wins & 10 nominations.

A little bit of magic time.

I spend more time in the trees|than the squirrels.

Wizard Two? Why not?

My first was on a golf course|in South Carolina.

It wasn't that bad. A couple of|doglegs that were more dog than leg.

All in all, it was playable.

The second coronary was at Augusta,|where they had the Masters.

Went down on the first fairway.

Good thing too, because those greens|would have been the end of me anyway.

My wife used to ask me|before she passed on:

Why do I play a game that|seems destined to kill me?

... when I was just a youngster|in Savannah, Georgia.

Jones and Hagen are really at it.|Neck and neck.

- Nuts!|- Remember that drive he hit?

I don't care how good they are.

He won three times in a row.

When I was growing up,|every town had its heroes.

Ours was Rannulph Junuh.

An athlete who was a born winner.

Junuh has the most difficult shot|in the history of golf.

He must sink this shot from 110 yards|to win the championship.

He steps up to the ball.

The crowd is hushed in anticipation.

Can he make this miracle shot?

I'd never seen him play|since it was before I was born...

... but it was said Junuh was on track|to being the greatest golfer ever.

"Titanic off the tee."|"Approach shots which fell to earth."

As Sam Snead once put it,|"Like a butterfly with sore feet."

He won just about everything.

But even he would say|his most significant victory...

... was winning the heart|of Adele Invergordon.

Daughter of the wealthiest man|in Savannah.

It was a patriotic call to arms...

Junuh and everyone in town|believed it was his destiny...

... to lead the young men of Savannah|into battle.

It was to be his crowning glory.

But nothing could have|prepared him or anyone...

... for the shock and sorrow|of what was to come.

But Adele, being a woman of the South,|had survived worse than desertion.

She moved on with her life, dedicating|herself to her father's dream.

This is the most magnificent|golf resort on God's earth...

... and I'm building it|here in Savannah.

Krewe Island.|Legacy to my sweet Adele.

And we'd like to use all of you|as our main suppliers.

Thank you, that's quite an honor.

I wouldn't dream of anything but.

We can't repeal the Commandments,|they don't obey that.

Yet no law on the statute book...

Jobs were lost.|Stores and banks were shut for good.

And John Invergordon, having spent|his last dime on his great dream...

... opened Krewe Island on what should|have been a glorious spring day.

It might not have been a shot|heard around the world...

... but it reached every|corner of Savannah.

I'll be putting some doors and closets|in the parlor.

The Legend of Bagger Vance