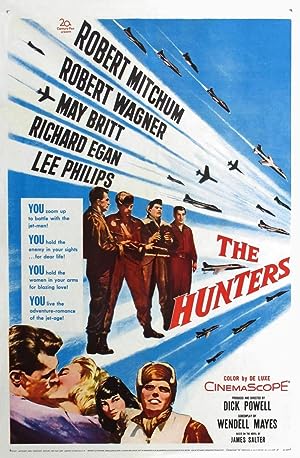 Synopsis: In 1952, as the Korean War rages on, American officers land in Kyoto. Among them are Major Ceve Saville, assigned to a fighter squadron, and Lieutenant Carl Abbott. The latter neglects his charming wife Kristina, who is sinking into bitterness. In Korea, Saville meets again Colonel Dutch Imil, a former brother in arms as well as other friends. Back in Japan Saville falls in love with forsaken Kristina, which arouses Abbott's jealousy. The two men turn into implacable rivals. But during a mission against Chinese Migs, Abbott is hurt and Saville decides to rescue him...
Genre: Action, Drama, Romance
Director(s): Dick Powell
Actors: Robert Mitchum, Robert Wagner, Richard Egan, May Britt
Production: Fox

You can rest in the lounge. | Over here through the door.

Pardon me, Major, | but aren't you Cleve Saville?

I was a second lieutenant | with your wing in London.

Yeah, there he is. | Lieutenant Abbott. Lieutenant.

Lieutenant, this officer's assigned | to your group. This is Major Saville.

Kevin, give me a double bourbon, will you? | And fill the major's up when he's through.

It's this sinus. I didn't connect. | Sure, we've been expecting you.

Some of the guys | are already trying to get in your command.

I was gonna say, it may be a different war, | but nothing else has changed.

You still find everything out for yourself. | What command?

Kevin, put one on the fire, will you?

He's our group commander. | He flew with you.

I remember Imil. | We were in the same flight in London.

Yeah. He goes way back too.

A killer. A hunter.

He eats two steaks at a sitting. | The world is too small for him.

The only thing a fighter pilot needs is | confidence - and he's got enough for all of us.

That's my flight. | Do you want to have dinner with me?

Major, I want you to come. OK?

Kevin. You're neglecting me.

Tell the driver I'll be right back, will you?

- Do you have a table for a Lieutenant Abbott? | - Yes, sir. There is someone waiting for him.

No, thank you. I'm not staying.

He will take you, sir.

Do you, uh, speak English?

Somehow, in a place like this, | I expected you to be Japanese.

I came to tell you he won't be here.

Well, I'm not, but neither is it a bad idea.

- Where is Lieutenant Abbott? | - As a matter of fact, he's outside in a cab.

It wasn't the doubles at the club, | it was the triples on the way over here.

I'll drop you off where you want to go | before taking him back to the field.

I wouldn't like anyone to see him this way.

In a barracks on a weekend there's nothing | odd about a man being poured into bed.

I know, but I want to take him with me.