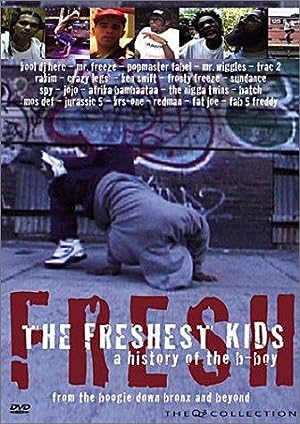 Synopsis: From the Boogie Down Bronx and beyond, the history of the B-Boy.
Genre: Documentary
Director(s): Israel
Actors: Afrika Bambaataa, Yasiin Bey, Crazy Legs, Fab 5 Freddy

They Market Hip Hop as a thug thing, like

and so you know, all the Bboys were left out

It is over their head

No doubt, cuz you got a lot of new kids in here

they don't know nothing about old school, or they claim to be old school, they be frontin'

You know what I mean?

I can't really say I invented it, because it was a couple of us that really invented it

And because it's a, it's a real artful way to live through the bad times of it

It's almost like a bible, you know what I mean man, eventually you gotta go back to the original scripture

and the original language it was written in

and, we, I think that everybody in the East and the West coast needs to redefine our dance

and then take control of it again.

All of that, piled into one, when you look at Bboying, it makes sense

It's like, "Okay, I can see where this is coming from." It's a lot deeper than just "Well this is fun and I think I'll...

It may start out as that

And getting notice for the culture of it, not cuz its a street dance and its always going to stay in the streets

I think people need this, there's no way you can not need this in society right now.

Coming from the ghetto, where everyone thinks its so negative, and we're doing something positive

We did the first show that set the foundation of what has become an industry now and we ain't gettin no love...

We were known as Bboys

Bboying is like the ultimate body manifestation of Hip Hop

Not only do you have your feet moving and your hands moving, you are using every single part of your body

Your head, your neck, your intellect and also your character

It's like a charge that I get, it's kind of equivalent to the excitement you get from watching..

a basketball player coming down and he's about to do an incredible move, and you just "ahhhh"

It's like you create this tension and you release it, and visually its exciting

It's an incredible dance, I mean, who in a million years would have thought like wow, spinning on your head..

Or you know, doing windmills, having your feet kick up and propel

Who would have thought that a person can spin on one hand?

It's not a trend, you cannot say it's a trend anymore, it's a legitimate artform.

We used to eat, piss, shit, drink and think bboying.

Music is what makes me develop my styles and my moves

Breakdance is always..it's like... It's Hip Hop. Straight up.

Hip Hop is the name of our creative intelligence

Hip Hop is the different elements dealing with music,

Bboys, what you call "Break boys"

Or Bgirls, what you call "Break girls"

and also dealing with Culture

And a whole movement dealing with: Knowledge, Wisdom and Understanding as well as

Discuss this The Freshest Kids script with the community: