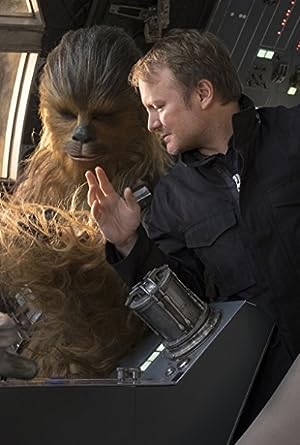 Please let me introduce our producers and our mentor,

to just say that I've been making movies

for a long, long time.

And I don't think, seriously,

I have ever had an experience

like I've had with this guy and this guy.

They are the best.

And you guys know that...

You know that you are very, very lucky

to have been led by this team.

So, I'm going to let them speak to that.

I don't want to freak anybody out here,

but I think we just made a Star Wars movie.

Do you have a new project?

Right as we were finishing

the news broke about Rian Johnson.

Actually, you and I talked on the phone.

I was in my car, losing it,

"Did you see this, Rian Johnson, what?"

I love what he tweeted when the news broke,

which was that clip from The Right Stuff.

'Cause he's not really a recognized name.

it's a really bold choice.

How is Rian Johnson's style

All I know is that I'm super excited

And super excited to watch

The Force is certainly with

in its opening weekend.

- It was really amazing.

- It was really a roller-coaster.

Okay, everybody, I gotta get to Star Wars.

I think Rian Johnson is an incredibly talented individual,

and I hope that within the Star Wars world,

he will give us something that is new,

and interesting, and exciting,

and he will still make something that

take over somebody else's world?

I mean, honestly, it's the most fun

I've ever had writing. It's justjoyous.

But I don't know.

- Ask me again in a few years.

And that word, "conflict,"

that word is straight from Luke's,

when he confronted Vader.

"I feel a conflict in you."

"I looked into his eyes and I saw conflict.

"I saw he could be turned.

"And if he were turned from the dark side,

"that could shift the tide

and save the Resistance.

"This could be how we win."

"This is not going to go

the way you think."

"It is, because there's more."

I wonder if we can even ease off

on the intensity of it,

The truth is I always put myself

in the shoes of..

If I wasn't involved in this movie,

the only thing I would really want is a good movie

that delights me in ways I didn't expect.

You know what actually would be nice maybe?

You listen to me now. Instead of

holding it on him as a threat,

you bring it in.

- And then that can be a more intimate...

The spotlight now is definitely on us, on Rian,

on making this movie...

which I think is great...

You listen to me now!

... as long as everybody's in sync

on what that movie needs to be.

And that's always the hard part.

The caliber of people that we've got, it's pretty amazing.

Every single person is the best

at what they do here.

All these other department heads