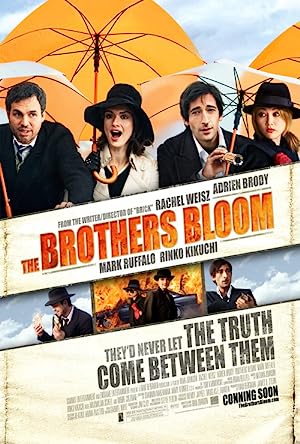 Synopsis: Brothers - older Stephen and three years junior Bloom - have been con artists since they were kids. Stephen is the mastermind, for who the intricacy of the story used in the con is as important as the positive outcome of the swindle. Bloom is the main character of Stephen's stories, the character he considers the anti-hero. As adults, they travel the world and never enlist the same people twice in their cons, except for their consistent sidekick, the mysterious and primarily silent Bang Bang, a Japanese woman who just appeared in their lives one day and who has a penchant for blowing things up. As Bloom hits his mid-thirties, he wants to quit the business as he is losing his own identity to that of the characters he portrays; he doesn't know anymore what is real and what is make-believe. Stephen talks him into one last con, the mark to be the eccentric, lonely but beautiful New Jersey heiress, Penelope Stamp. Penelope's primary past-time in life is to, as she calls it, "borrow hobbies"
Genre: Adventure, Comedy, Drama
Director(s): Rian Johnson
Actors: Rachel Weisz, Adrien Brody, Mark Ruffalo, Rinko Kikuchi
Production: Summit Entertainment
3 nominations.