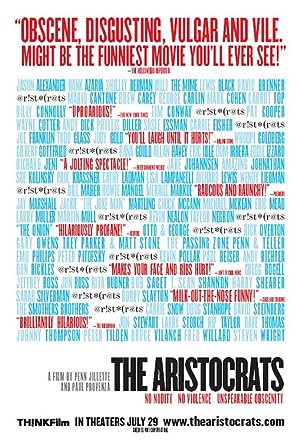 Synopsis: Comedy veterans and co-creators Penn Jillette and Paul Provenza capitalize on their insider status and invite over 100 of their closest friends--who happen to be some of the biggest names in entertainment, from George Carlin, Whoopi Goldberg and Drew Carey to Gilbert Gottfried, Bob Saget, Paul Reiser and Sarah Silverman--to reminisce, analyze, deconstruct and deliver their own versions of the world's dirtiest joke, an old burlesque too extreme to be performed in public, called "The Aristocrats."
Genre: Comedy, Documentary
Director(s): Paul Provenza
Actors: Chris Albrecht, Jason Alexander, Hank Azaria, Shelley Berman
Production: Planetmatt Entertainment
6 nominations.

"The joke leads me down one path" | and then it switches the path on me suddenly,

and it hits me with a hammer.

You have outstretched yourself when you're | doing it right, on making it as horrific as you "can. "

I remember that I... fainted.

They told it on the Nina or the Pinta or Santa | Maria when Columbus was crossing the "ocean. "

I think Lincoln told me, I'm not quite "sure. "

Of all the jokes to do a documentary about, | you chose this one?

"There was the Secret Society - | Chevy Chase, Michael O'Donoghue.

John Belushi and some others.

They had this coven of people | who would tell this joke over and over "again. "

Chevy Chase supposedly used to have "parties. " | And the criteria was,

And you had to talk with some combination | of that without repeating "yourself. "

If you repeated yourself, you were "out. "

The idea was we gotta break a half an "hour. "

We gotta get - we gotta make this joke | last more than half an "hour. "

But died in the "attempt. "

It's the only joke I know that people talk about.

It had been kicked around a "lot. "

Like the first time | you hear a cut from a Lenny Bruce "album. "

I heard it from a gentleman | who ran Second City in "Chicago. "

...UCLA, working on the humour magazine, | the editor told me the "joke. "

- Bill Hicks - that's where I heard "it. " | - I first heard the Aristocrats while doing blow

in Catch A Rising Star with Richard "Belzer. "

This joke is a friend of every comedian | in the "world. "

I first went to the Improv nightclub | in New York in '73.

Did some stand-up comedy, | became the manager,

and got to meet | the best young comedians of that time.

Got a real education in the comedy world.

One of the things that was consistent | wherever you went was "the... "

I had heard about the Aristocrats "joke. "

We do comedy | and we work places that have comedy,

but we're also in the magic world, | so we're kind of observers of the comedy "world. "

There was always a secret handshake | "of... " of a whole culture thing,

that was, to me, | symbolised by the joke, the "Aristocrats. "

I don't think comics should be that proud, | quite frankly,

about repeating a joke | that's been going on since

Bud Friedman opened the first Improv | next to the "pyramids. "

Comedians didn't tell this kind of joke on "stage. "

How many people tell jokes on stage?

People usually have routines | or they string together small "observations. "

You know the way those urban legends go?

People always knew somebody | who saw this guy doing "it. "

But I never saw anyone performing "it. "

It's a kind of joke you love telling other "comics. "

Discuss this The Aristocrats script with the community: