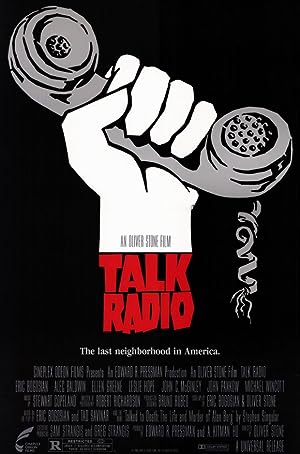 Synopsis: An acerbic radio talk show host based in Dallas starts what could be an important few days when he discovers that his controversial late night show is about to be "picked up" by a nationwide network of radio stations. However, all is not perfect for him, because on top of troubles with his love life and fears that the management of the network will try to alter the content of his show he has to cope with a neo-nazi group who have been angered by his forthright opinions.
Genre: Drama
Director(s): Oliver Stone
Actors: Eric Bogosian, Ellen Greene, Leslie Hope, John C. McGinley
Production: MCA Universal Home Video
3 wins & 5 nominations.

There's a tornado watch|for a portion of West Texas.

Brian Chadwick is with the county|sheriff's office in Sweetwater.

We're trying to get the word out to|the community to brace themselves.

We hope this thing's not gonna|develop into a real funnel...

but after Saragosa, we're|not taking any chances.

and with the exception of some rain, it|shouldn't affect the Dallas-Fort Worth area.

The KGAB phone lines are open|and ready for your call...

- The worst news|of the night is that...

three of four people say they'd rather|watch TV than have sex with their spouse.

The second worst news is that some|kids needed money for crack last night,

so they stuck a knife in the throat|of an 80-year-old grandmother...

down on Euclid Avenue|right here in Dallas.

One night|in one American city.

Multiply that by hundreds of|cities and what have you got?

A country where culture means|pornography and slasher films,;

where integrity means Iying,|whoring and intoxication.

This country is rotten to the core and|somebody better do something about it.

Take your hand out of that bowl of|Fritos, throw away your National Enquirer,

and pick up the phone,|hold it up to your face...

Open your mouth and tell me what we're|gonna do about the mess this country's in.

Talk radio- it's the last|neighborhood in town.

People don't talk|to each other anymore.

A lot of problems with the|country today have a lot do...

- with the continued exploitation|of the third world countries.

Do you know what it means?|You're getting off the track.

We're not getting off the track,|we're getting on.

Josh, go back to college. When|you graduate, give me a call.

looking for people with|problems he can call his own.

Francine in Oakline.|I'm a transvestite.

I'm trying to save money|for an operation...

What interest do you think your adventures|in surgery hold for my listeners?

It's something I have to talk|about. I don't. Night Talk.

Let me put you on hold. You slip|some testosterone into Barry's coffee?

Sometimes I come home from work and|we have dinner together, you know?

No, I don't know. You have|dinner at the table with your cat?

With a tablecloth and|candles? No, Barry.

Just her own plate on the floor. Good.

But we eat the same things. Like if I|have a pork chop, she has a pork chop.

Yeah, I heard your little|advertisement there for the pizza place.

Yeah, Jericho's Pizza. I love|that pizza. Don't you like it?

You sound like you'd love|it. I enjoy Jericho's Pizza.

What I wanted to say to you|tonight, Mr. Champlaign, was...

I have an interest in this place,|or at least, some friends of mine...