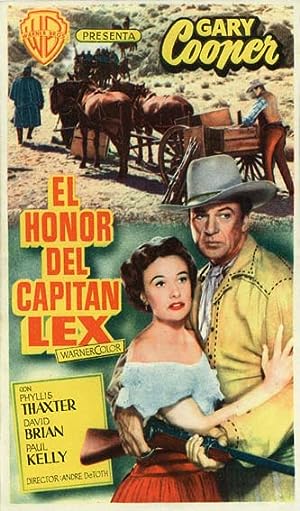 Synopsis: Major Lex Kearney, dishonorably discharged from the army for cowardice in battle, has actually volunteered to go undercover to try to prevent raids against shipments of horses desperately needed for the Union war effort. Falling in with the gang of jayhawkers and Confederate soldiers who have been conducting the raids, he gradually gains their trust and is put in a position where he can discover who has been giving them secret information revealing the routes of the horse shipments.
Genre: War, Western
Director(s): André De Toth
Actors: Gary Cooper, Phyllis Thaxter, David Brian, Paul Kelly
Production: Warner Bros.

lost to raiders in three months.

There isn't a command in the Army

He'll have to do with what he has.

Hudson's tried to reach the railhead

by every route available.

Yet our forces have always

been intercepted by raiders.

on the strength of our cavalry units...

...and that means horses.

Fort Hedley's in the center

of all the great southwestern herds.

It was your idea to establish

a purchasing depot there.

Now, what are you doing about it?

We've known that the Confederacy

has a well-organized spy system.

They know the importance

of horses to us.

Their men may operate

even in our own fort.

All I was permitted to do was to send

a private detective out there, a civilian.

Everyone spotted him right away.

General, as I've told you many times...

...the only answer to their espionage

is an espionage system of our own.

- Taken it up three times with the Cabinet.

They won't stand for our men in uniform

They stand for enemy agents

knocking the war out from under us.

They think spying is beneath the dignity

and honor of an Army man. That settles it.

How do you expect me

to get those horses here?

a few miles south of here.

If we are to mount a successful offensive

in the spring and end the war...

That's why Hudson's out at Fort Hedley,

and why you're chief of planning.

I don't care how you handle it, but don't

come to me with it again. Just get horses.

It isn't that they know

You can't hide the trail

of hundreds of horses.

But they know in advance

what pass we're going to cross.

They don't have to spread their men so thin.

You must have some idea

how the information's getting out.

The whole town's full of people

trying to sell horses and information.

I can't do it all alone.

you're here on a routine inspection.

looking for a chance to replace me.

Well, if they don't send me enough men

to do the job, let them replace me.

It'd be much easier

leading a bayonet charge back there.

Mr. Quint, will you excuse us?

I have a confidential matter

to discuss with Colonel Hudson.

I wasn't able to get you more men.

But before I came, I stopped at the arsenal

Without orders, I may add.

John, some gunsmith is trying

a new idea with the Springfield rifle.

I saw a demonstration that was amazing.

It operates with a new bridge action.

That rifle can be loaded and fired so fast,

When can I get them?

May be a long time

- Then what good are they to us?

Maybe I can convince them

to let us experiment in action.

If not, I'll have to wait

until they aren't looking.

Can't get them any other way.

In the meantime, I'm supposed

to use magic to get the horses through.

Magic and that incompetent you sent me

who calls himself a detective.

Now I'll let you in

on a little secret, George.

I think we have the raiders

I've sent the drive out under Lex Kearny,

the new major just assigned me.

He's taking a route those raiders

Charles Marquis Warren (December 16, 1912 — August 11, 1990) was an American motion picture and television writer, producer, and director who specialized in the western genre. He is notable for his involvement in creating the television series Rawhide and in adapting the radio series Gunsmoke for television. more…