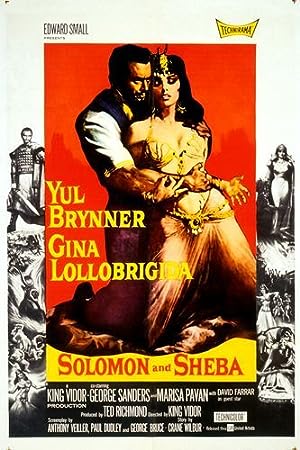 Synopsis: Shortly before his death in ancient Israel King David has a vision from God telling him that his younger son Solomon should succeed him as king. His other son Adonijah is unhappy and vows to attain the throne. Meanwhile the Egyptian Pharoah agrees to cede a Red Sea port to the Queen of Sheba if she can find a way to destroy Solomon, whose wisdom and benevolent rule is seen as a threat to more tyrannical monarchs in the region. Sheba, Pharoah, Adonijah, the leaders of the Twelve Tribes and his own God make life difficult for Solomon who is tempted by Sheba to stray.
Genre: Drama, History, Romance
Director(s): King Vidor
Actors: Yul Brynner, Gina Lollobrigida, George Sanders, Marisa Pavan
Production: United Artists
1 nomination.

This is the borderland that lies between | the countries of Egypt and Israel.

Even then, these boundaries | were kept ablaze

with the fires of hatred and conflict.

Each side prided themselves | on the efficiency of their spies

but kept themselves | always on the alert.

Soldiers of David, commanded by his | son and heir Adonijah, prince of Israel.

- A chariot moving along the road. | - Stop the fool, whoever he is.

Prince Adonijah is at the top of the hill. | Follow me.

Solomon! What are you doing here?

On my way to Jerusalem, we got word | the Egyptians were on the prowl again.

You are better suited to singing songs | than exploits in battle.

Our father David was a singer of songs, | but he"s also a mighty warrior.

- Where are the Egyptians? | - They thought to trap me,

to rush in on our camp and kill us | while we slept, but we"re not sleeping.

Give me your orders.

This is not your kind of game, brother.

I never thought of it as a game. | I fight by your side.

- Then the sword of victory, Solomon. | - And the shield of God, Adonijah.

Spread out, and kill them all.

Once again, the Pharaoh will have reason | to remember the name of Adonijah.

Let him write it in the blood of his dead.

Too long | this soil has been bathed in blood.

Have you lost your taste for blood | now that the battle is over?

After seeing the glory of victory,

the glory of peace makes itself known.

Peace is for women and children.

Let me cleanse my mouth | of the stench of the Egyptians.

To a new victory | won by the Prince of Israel.

- To the warrior prince, Adonijah. | - To Adonijah.

To your glory, brother. | May it increase the glory of Israel.

There would be greater glory if I were | not shackled by command of my father.

When I am king, there will be no | privileged sanctuaries for my enemies.

I"ll pursue them into their own cities.

Highness, this one was found | among the dead, but he is no Egyptian.

The Pharaoh has mercenaries, | but I have never seen one like him.

- From where do you come? | - I have the honour to serve Her Majesty.

Where goes the Queen of Sheba | there go I, a soldier of her guard.

Why does a Sheban | fight with Egyptians against Israel?

I fight where my queen commands.

And it pleased my queen to lead | her troops against a band of barbarians.

I"ll send your hide to this brave queen | of yours as a token of my esteem.

No. Grant him the respect | one soldier should have for another.

Bind up his wounds.

Out of regard for the tender heart | of my dear brother.

This queen amuses herself | by leading men across our borders

to slay Israelites | as she might attend a circus.

I doubt if she found | much amusement here.

No, Highness. If that were so, | mine would be a far happier mission.

Your father, King David, | lies at the point of death.

He lapsed into a coma | and has not regained consciousness.

His physicians could give me | no word of hope to bring you.

Josiah, we ride to Jerusalem.

It is not your right to proclaim the king. | These are the words of the Law: