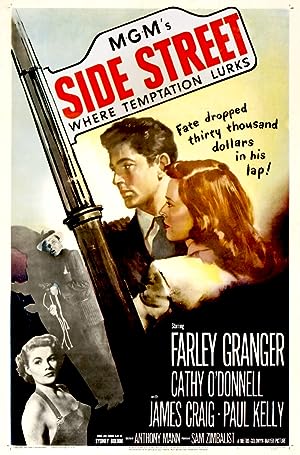 Synopsis: Joe Norson, a poor letter carrier with a sweet, pregnant wife, yields to momentary temptation and steals $30,000 belonging to a pair of ruthless blackmailers who won't stop at murder. After a few days of soul-searching, Joe offers to return the money, only to find that the "friend" he left it with has absconded. Now every move Joe makes plunges him deeper into trouble, as he's pursued and pursuing through the shadowy, sinister side of New York.
Genre: Crime, Drama, Film-Noir
Director(s): Anthony Mann
Actors: Farley Granger, Cathy O'Donnell, James Craig, Paul Kelly
Production: MGM

An architectural jungle | where fabulous wealth...

...and the deepest squalor | live side by side.

New York, the busiest, the loneliest, | the kindest and the cruelest of cities.

I live here and work here.

My name is Walter Anderson.

...whose job is to protect the citizens | in this city of 8 million.

Three hundred and eighty new citizens | are being born today...

One hundred and sixty-four couples | are being married.

One hundred and ninety-two persons | will die.

...and at least one of them | will be a victim of murder.

A murder a day, every day of the year.

And each murder | will wind up on my desk.

Which of these people | will be the victims?

Which will be the killers?

New York is all things and all places | gathered into one community.

Every problem | that troubled a man's heart...

...every dream | that ever stirred his blood is here.

For this city, like any other, | is the sum of its people...

...with their frailties, | hopes, fears, dreams.

This one, does he secretly long | to recapture his vanished youth?

And this one, a part-time letter carrier, | dreaming of the unattainable:

A fur coat for his wife.

These, are they tragedy or comedy?

This man looks troubled. | He has a problem.

Might be helpful to a policeman | to know the details...

...of some of the problems | that walk the streets of New York.

- But you came to the right place. | - All in hundred-dollar bills.

There's a story in each of them.

Where the passing of a casual stranger...

...may start a drama | that irretrievably alters a life.

They act like they got nothing else to do.

Like they never saw a street | dug up before.

You know, Charlie, | maybe they got too much to do.

That's why they stop.

Takes your mind off things.

Gives you a breather.

Thirty years, one job, too long.

The missus and me gonna go down | to Florida when the pension's due.

Kids all grown up, we ought to | be able to get by on half pay.

No Florida for me.

Then I wanna show Ellen around | Rome, Naples. The museums, the works.

You know what I'm gonna do, Charlie?

I'm gonna get Ellen one of those | mink coats. Not the short kind.

One of those long, fluffy models.

Ah. So long, Charlie. | Gotta get through early.

Go see if my yacht's finished.

Everything's gonna be all right, baby. | Hold it.

...and our friend Lorrison | won't give you trouble.

What would happen if Lorrison...?

But of course I do, honey.

Why do you think | I'm going through with this?

How soon are you sending George over?

But when this is over, | let's get away from here.

You name it and we'll do it.

I'll, uh, catch up with you later.

Havana, Miami, by way of the East River.

Sydney Boehm (April 4, 1908 – June 25, 1990) was an American screenwriter and producer. Boehm began his writing career as a newswriter for wire services and newspapers before moving on to screenwriting. His films include High Wall (1947), Anthony Mann-directed Side Street (1950), the sci-fi film When Worlds Collide (1951), and the crime drama The Big Heat (1953), for which Boehm won a 1954 Edgar Award for Best Motion Picture Screenplay. Boehm was born in Philadelphia, Pennsylvania on April 4, 1908 and died in Woodland Hills, California on June 25, 1990 at age 82. more…