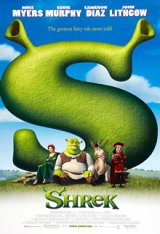 Synopsis: Once upon a time, in a far away swamp, there lived an ogre named Shrek (Mike Myers) whose precious solitude is suddenly shattered by an invasion of annoying fairy tale characters. They were all banished from their kingdom by the evil Lord Farquaad (John Lithgow). Determined to save their home -- not to mention his -- Shrek cuts a deal with Farquaad and sets out to rescue Princess Fiona (Cameron Diaz) to be Farquaad's bride. Rescuing the Princess may be small compared to her deep, dark secret.
Genre: Animation
Actors: Mike Myers, Eddie Murphy, Cameron Diaz, John Lithgow
Production: Dreamworks
Won 1 Oscar. Another 36 wins & 60 nominations.

Once upon a time there was a lovely

princess. But she had an enchantment

upon her of a fearful sort which could

only be broken by love's first kiss.

She was locked away in a castle guarded

by a terrible fire-breathing dragon.

Many brave knights had attempted to

free her from this dreadful prison,

but non prevailed. She waited in the

dragon's keep in the highest room of

the tallest tower for her true love

Allstar - by Smashmouth begins to play. Shrek goes about his

day. While in a nearby town, the villagers get together to go

Think it's in there?

All right. Let's get it!

Whoa. Hold on. Do you know what that

thing can do to you?

Yeah, it'll grind your bones for it's

Shrek sneaks up behind them and laughs.

Yes, well, actually, that would be a

They'll make a suit from your freshly

They'll shave your liver. Squeeze the

jelly from your eyes! Actually, it's

quite good on toast.

(waves the torch at Shrek.)

Shrek calmly licks his fingers and extinguishes the torch. The

men shrink back away from him. Shrek roars very loudly and long

and his breath extinguishes all the remaining torches until the

men are in the dark.

This is the part where you run away.

(The men scramble to get away. He laughs.)

And stay out! (looks down and picks

up a piece of paper. Reads.) "Wanted.

throws the paper over his shoulder.)

There is a line of fairy tale creatures. The head of the guard

to him. There are cages all around. Some of the people in line

are Peter Pan, who is carrying Tinkerbell in a cage, Gipetto

who's carrying Pinocchio, and a farmer who is carrying the three

All right. This one's full. Take it

away! Move it along. Come on! Get up!

Ted Elliott (born July 4, 1961) is an American screenwriter. Along with his writing partner Terry Rossio, Elliott has written some of the most successful American films of the past 30 years, including Aladdin, Shrek and the Pirates of the Caribbean series. In 2004, he was elected to the Board of Directors of the Writers Guild of America; his term on the board ended in 2006. more…

Submitted by acronimous on September 21, 2016

Discuss this Shrek script with the community: