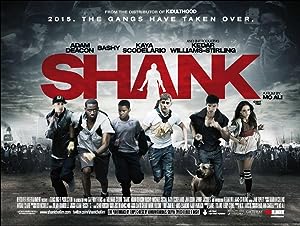 Synopsis: Set in a dystopic future London in 2015, where society has fallen apart, gangs have taken over and the economy is in complete anarchy. The story follows Junior and his older brother, Rager, who are in charge of a local gang, "The Paper Chaserz". They try to stay out of trouble and refuse to kill as part of their 'moral code', which is especially enforced by the strong but defensive Rager. Rager leads his gang, "The Paper Chaserz" and they plan to steal goods out of a local van. The robbery is successful, but a rival gang called The Soldiers, who are notorious and bloodthirsty in trying to take-over all other postcodes in the London area, attempt a theft. The "Paper Chaserz" escape, except for Junior who is stranded and cornered by The Soldiers. Rager reappears and saves his brother by beating all the rival gang members, telling Junior to leave. As Junior flees, Rager is attacked by the crews leader Tugz, who stabs Rager in the back multiple times. Junior now teams up with the rest of h
Genre: Action, Comedy, Crime
Director(s): Mo Ali
Actors: Kedar Williams-Stirling, Adam Deacon, Ashley Thomas, Michael Socha
Production: Revolver Entertainment

"And the royal spokesman for King William reported

that he won't be returning to his residence."

Why you running for?

- Why you running though? What cool in it?

You trying to move to me? Relax.

Why you so shook?

We just want to talk to you, fam.

Junior:
Let go of me!

London, were everybody is in a squalor.

Everyday, you know it could be

I wake up and that could be me, today.

Dis is how we live.

So you've gotta be prepared.

and get good plans.

Violence, only way to get

Dat died a long time ago.

Fuckin pigs. Never done nufnk for me and fam.

They dont support our community.

support. Government mans sold it all up.

So we cant touch dem no more.

and the rich keep to their safe, safes.

So we gotta take it for ourself.

Gotta be on dis ting,

cos if you aint -

deem you're a victim.

Now they call me "Junior". I'm the getaway kid.

Always mac on my feet.

Ain't nobody catching me.

Got enough love for him.

We don't know our dad,

but that made him strong, man.

Hope I grow up like Rager. He's da boss.

I want to be boss one day, too.

Thinks he too buff. Sayings a lot of shit, saying

he's got enough Choongings in his life.

I just call him "Pomppadom".

He is suppose to be doing the drivin'.

But most of the time he's just busy

Made him a bit psycho, still.

Oh, and dat is Dutty.

Dutty is Dutty because he shitz everywhere.

We don't go nowhere without him though.

make a livin'. Busy on the paper chase.

Dat why we call ourselves da "Paper Chaserz".

Me and Rager. Our mom died when I was ten.

He promised he would always look after me.

He waz always smart. Even back then,

he was running with the man.

Very violent men they were.

But he got out.

He knew the only way to survive since the

country went to shit was to do some business.

Business stealing munchies! And it got very

sticky, so we got some boys together.

We knew da only way of staying safe was to

Kickz, they got smart too.

because dat waz back in the day

when you went hungry, or got killed.

Now they owe Rager for dat.

We've got our love when a feud breaks out.

Dats all anyone needs now, munchies.

We don't kill for dat. We just robbin' and like.

Dats how we don't get killed most times.

Ohh, we get the best munchies!

You can't beat that!

- How you doing, Junior?

Paul Van Carter (born 15 November 1976) is an award-winning British film producer, novelist, and screenwriter.As a producer, his most recent films include the Winston Churchill biopic Churchill set in the hours preceding D-Day 1944 which stars Brian Cox, Miranda Richardson, and John Slattery; the biopic of bare-knuckle boxer Lenny McLean entitled My Name is Lenny which stars Josh Helman, Michael Bisping, and was the last film of actor Sir John Hurt; and the documentary about footballer Paul Gascoigne's life Gascoigne. As a screenwriter his credits include the prison drama Offender, the action film Shank, and the documentary The Guv'nor, which he also directed. As novelist his history of twentieth century painting Oil on Canvas, was published in 2011. He is the co-founder of the London-based film production company Salon Pictures, whose other slated projects include a documentary directed by Rob Ryan entitled Breaking Habits, about the Sisters of The Valley, a commune of nuns in California who grow marijuana for medicinal purposes,, and the biographical film McQueen about fashion designer Alexander McQueen distributed by Lionsgate and Bleecker Street. He was raised in Letchworth Garden City and is married to Kristina Van Carter. more…