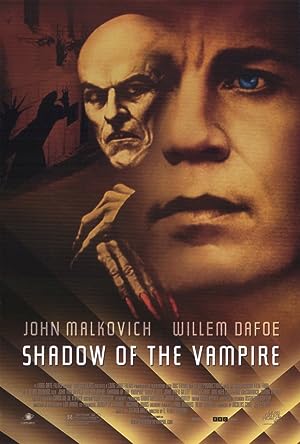 Synopsis: Shadow of the Vampire is a film about the making of a German all time classic silent horror-movie from 1922 called Nosferatu-Eine Symphonie des Grauens (Nosferatu-a Symphony of Horror). The production of Nosferatu had to deal with a lot of strange things (some crew members disappeared, some died). This movie focuses on the difficult relationship between Murnau, the director, and Schreck, the lead actor.
Genre: Drama, Horror
Director(s): E. Elias Merhige
Actors: John Malkovich, Willem Dafoe, Udo Kier, Cary Elwes
Production: Lions Gate Releasing
Nominated for 2 Oscars. Another 14 wins & 24 nominations.

The lyricism,|you'd do well to emulate.|Albin, you clear the set.

You live in a nice house.

and you're married|to a kind man who's|promised to love you forever.

You have no inkling|of what lives at the bottom|of the flower box.

No sense of longing.

No notion,|even of death itself.

end, and print it.

Perfectly, Herr Doctor.|And in one take.

I'll need to see rushes|tomorrow before the train|in the morning.

Shooting outside the studios|will cost you much more.

But such is the price|of genius.

Thank God, an end|to this artifice !

You are developing|in a number of lovely ways.

For a moment, I even thought|I saw a premonition|of evil cross your face.

It wouldn't surprise me|with all this spooky shit|you've been saying to me.

I told you it's important|for the realistic effect.

But why do we have to|leave Berlin just now...

at the start|of the theater season ?

Albin, has your man|arranged the cars ?|Yes, two.

Do you have any idea|the parts I've been offered|at long last ?

The salaries ?|Will that be enough ?

There was a time|when you didn't ignore me.

Greta, why would you possibly|want to act in a play|when you can act in a fiilm ?

A theatrical audience|gives me life,

while this thing|merely takes it from me.

Greta, Ellen is a woman|who discovers...

in the most exquisite pain|imaginable.

Does that sound familiar ?

It is the role|that will make you great|as an actress.

Consider it a sacrifiice|for your art.

[Murnau] Work quickly,|ladies and gentlemen.|We have a train to catch.

Albin, what did|you give the cat ?

Why, did it show ?|It looked|a little pickled.

Not as much as Greta.

Friedrich, we have to|talk about the vampire.

Wrap things up for me|here, will you ?

And I'll see you all|in the morning.

But what kind of clothes|should I pack for him ?

What kind of makeup ?|How tall is he ?

Does anybody know|where he's running off to ?

Perhaps he has a woman.|Or a man.

We cross the border|into Czechoslovakia|a few hours into our journey.

Well, you can assume|we'll be filming all of|Jota's scenes there.

The scenes between|him and the vampire.

I thought Dracula|lived in Transylvania.

Uh-uh, strictly speaking,|this is not Dracula.

So, who's playing|Count Dracula ?|I mean, Orlock.

His name is Schreck.

Schreck. You sure|you have the name right ?

- He's a character actor.|- Who told you he was playing|the vampire ?