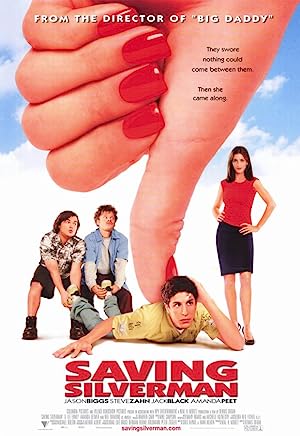 That concert rocked and rolled.|I know because I was there.

Eversince then, I've had this|cosmic connection with Neil.

But this story isn't about Neil.

It's about me and my two pals,|Darren and J.D.

And he's not very bright.

But when it comes to women,|he's incredibly gullible.

I'm loyal to my friends.

After that, I started working out.

I was the third-string quarterback.

Hey, what did you say|I didn't really motherfucking hear you.

Yeah, Darren's always|had a thing for her.

When you're up against a Warbird

He was a big influence in our lives.|He taught us many things.

Two things you got to remember, boys.

Number one:
Stay away from women.

All they want from you|is your man juice.

...if you get any urges that you can't|suppress with hard liquor, use this.

Le Fessier! Get out there!

I'm just gonna get my helmet.

But now we're all grown-up.

J.D. is rapidly working his way|up the ladder at Subway.

Recently he was promoted...

Okay, McNugent,|let's see what you got.

I've been working on them for 8 weeks.|I present the future of Subway.

...three sizes of bevy are small,|medium and what?

-Big?|-Like we practiced. You can do this.

Okay, we'll come back to you.

This guy's my stinkiest student|by far.

No, no. Meat on the inside,|bread outside.

Okay, take it away.

Don't judge me on those two guys.|This next guy's my protg.

He's top of his class, and for his|thesis he made a party sub.

Darren is a social director|at a retirement home.

I started my own business.

What are we dealing with here?

I don't know, but it sounds big.

Stay back. I'm going in.

So you're causing|all this trouble, huh?

Get off! Get it off!

But she is in one deep coon coma.

But we all have one mystical thing|in common: Our love for Neil.

That's ourband,|Diamonds in the Rough.

Do you, maybe, want to grab|a drink with me?

With a real entertainer.

I can't believe I got blown off again.|I'll never meet the right girl.

Dude, what does a mime look like|when it's having sex anyway?

They do when they're off duty.

I'm really afraid that|there's nobody out there for me.

The only girl I ever loved...

...walked out of my life years ago.

Her family was with the circus.

Her dad was The Strong Man.

Hermom was The Bearded Lady.

Herbrother was The Dog-faced Boy.

Hank Nelken is an American screenwriter, best known for the comedy Are We Done Yet?. more…