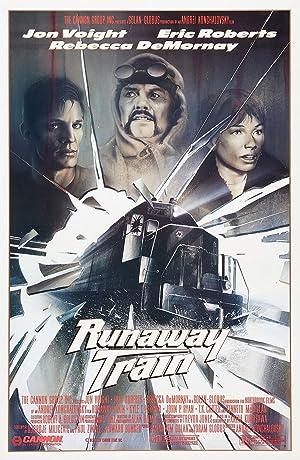 Synopsis: A hardened convict and a younger prisoner escape from a brutal prison in the middle of winter only to find themselves on an out-of-control train with a female railway worker while being pursued by the vengeful head of security.
Genre: Action, Adventure, Drama
Director(s): Andrey Konchalovskiy
Actors: Jon Voight, Eric Roberts, Rebecca De Mornay, Kyle T. Heffner
Production: MGM Home Entertainment
Nominated for 3 Oscars. Another 2 wins & 5 nominations.

Unfortunately, all were killed | in the subsequent crash of the plane...

and their names are being withheld | until notification of next of kin.

We switch now to our live action | reporter at the federal courthouse...

with the latest on | the Manheim-Stonehaven prison case.

has issued his opinion.

who has been welded in his cell | for three years...

has won | his civil rights suit...

against officials at Stonehaven.

Stay with us for details.

In a few minutes | we'll be back with comment...

The courts ordered | to let him out of the hole.

is gonna be on the tube soon.

Let the dudes in the cell blocks | hear him talk that shit he talks.

Hey, you got shit in your veins | or what, man?

I was holding | my mud around here...

when you were peeing | in your diapers.

Nobody wants prison to be a playground. | We all want criminals punished...

but don't you think you shocked | the public conscience...

by keeping a man welded | in a cell for three years?

He broke out of here twice, | he's robbed banks...

or even his own life.

Somebody shoot | that pansy vegetable!

He believes in nothing. | He's capable of anything.

Cons with strings of murders | are all afraid of Manheim.

He really fucking did it!

then why do all the other | prisoners love him so much?

They wanna do whatever they want, | no holds barred.

and the horse | you rode in on!

This is no country club, | you know what I mean?

Turn that fucker off!

Hey, Manny! | We got visitors!

On your feet, convict.

I've got a federal court order | to let you out of the hole.

I could ask for a stay | during the appeal.

I can last nine more months.

I could stand on my head | nine months.

I don't dirty my hands | on scum like you.

And I hope you make a move so I can | stop your clock. That's a promise.

Yeah, a promise. You promised to keep me | in this hole the rest of my life.

Kept you in here for three years. | That's long enough for me, kid.

Whatever doesn't kill me | makes me stronger.

and I'll send you out of here | in plastic.

Call the machine shop. | Bring him to the yard!

The bitch is loud.

You're all punks hiding there, | yelling in the dark.

Let me tell you | where you assholes stand.