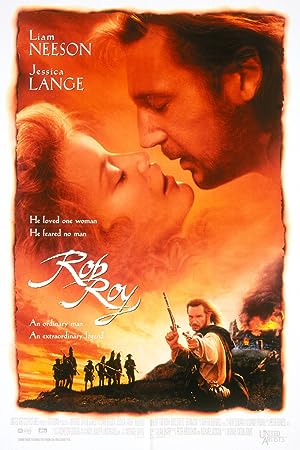 Synopsis: In the highlands of Scotland in the 1700s, Rob Roy tries to lead his small town to a better future, by borrowing money from the local nobility to buy cattle to herd to market. When the money is stolen, Rob is forced into a Robin Hood lifestyle to defend his family and honour.
Genre: Adventure, Biography, History
Director(s): Michael Caton-Jones
Actors: Liam Neeson, Jessica Lange, John Hurt, Tim Roth
Production: MGM Home Entertainment
Nominated for 1 Oscar. Another 2 wins & 2 nominations.

I deliver perfection...|and don't brag about it! :D

They're gone, Rob, and the beasts sold.

There's a wee glen|on the other side of Ben Duh.

If I were tinkers|with a two-day start,

I'd lie there and kill me some meat.

We'd not get there before dark.

Not stood here, we won't.

You can smell them through the meat.

Aye, if they fought|as strong as they smelled,

we'd be in trouble.

We can rush them when they're asleep.

Nine. One of them's a woman.

Half of them would be dead|before they were awake.

How will we take them, Rob?

I'll talk to them in the morning.

I'm getting too old for this...|lying wet arsed in the heather,

Come away|to the Americas with me.

They say there's fine acres|for the clearing in Virginia.

Aye, and they'll likely be|as hard as these to sleep on.

Why are you going in|to talk to them?

I know one of them.

Get up, you bunch of ragged-arsed|tinker cow thieves!

This is Robert Roy McGregor|come to reclaim the 32 beasts

stolen from His Lordship James Graham,

Still at your thieving.

Throw down now,|and I'll spare you, all but one.

There's a price to being|a leader of men, Tam.

By God, McGregor,|if there's any killing to be done,

Who do you think you are,|acting the great chief?

And I know you're a bigger thief|than any of us.

Aye, but if I had stolen|His Lordship's cattle,

you would not have|walked into my dreams so easy.

I can call the Gregorach|and kill the half of ya,

or it can be between us|and nothing more.

Would you not rather|be dead after a good hump

And a belly full of stolen beef

or have me march you|back to Montrose

to shit yourself|on the gallows a month hence?

And you have my word|no-one else will die!

Any man with a blade in his hands,

or what are ye?

He killed Tam,|and you stand and live!

And him as much an outlaw|as any of you!

No man among ya!|Your mothers curse you!

Listen to me well,|and remember this:

Or I'm going to remember you,|every last one.

When next you think to steal cattle,

have a care they're not|under my protection.

But if they are,|you're not stealing from their owners.

You're stealing from me,|Robert Roy McGregor.

No man who steals my beasts|makes a profit.

If you doubt me, ask Tam Sibbald.

What will you do with her?

Be on your way and tell no man|you fared ill at our hands.

Ladies and gentlemen,|the winner of the contest is Guthrie!

Montrose, come hotfoot|from the court to the cockpit.

May I present Archibald Cunningham.

His Grace, the Duke of Argyll.

I am Your Grace's humble servant.

Another of your likely lads?

Archibald is sent me by his mother

in the hope that our climate|might cool the fever in his blood.

what are these principal sins|that distress your mother?

Or are you a buggerer of boys?

It is years, Your Grace,|since I buggered a boy.

And in my own defence,|I thought him a girl

at the moment of entry.

What say you, Guthrie,

that Archie|could not tell arse from quim?

Many Englishmen|have that same difficulty.

Oh, spoken as well as you fought.

Did you see Guthrie here at work,|Mr Cunningham?

He has a fair hand with the cleaver.

You do not think much|of our highland tools, then?

If I had to kill an ox, a claymore|would be my first choice, Your Grace.