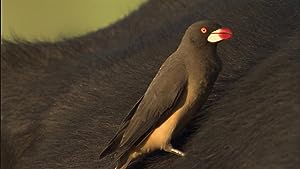 and there are prey.

And then, there are enemies.

Africa has been the place

and swamps of prehistory.

It was a violent time,

when the nightmare of massive predators

stalked the land and nothing was safe.

Well, those nightmares are back.

There is an unusual pride of lions

Cats that live in water and hunt a single herd

that can hunt a range of prey,

but these lions are defying that trend

relentless hunters of this one prey.

is an unsettling prelude to the battle ahead.

the conflict is a war of wills.

The outcome will hang in the balance.

There is an island in Africa,

a place where the ghostly shapes

drift over the domain

of the resident pride of lions.

The Tsaro pride are buffalo hunters,

made up of nine lionesses of enormous bulk.

features that serve them well

for this unique hunting.

Amongst them, a silver-eyed female,

possibly blinded in combat with the buffalo.

She carries her battle scars well

and leads many of the hunts.

The heaviest set is a skew-eared female.

to cubs at the same time

and always hunt together.

Then there is the large older female,

but there is something different about her.

She sits off to the side,

is the herd's pathfinder,

and he has led it around

the Tsaro territory for years.

He is a survivor

and senses the trouble ahead.

There is a magical moment

in any hunt, each time,

a time somewhere between the initial

and the coordinated run-in of a unified pride.

At that moment, the decision is made,

There is no fight like the fight for survival

and for the life of your offspring.

But these lions will not accept failure.

It spurs them into a deadly game

of attack and counterattack,

thrust and parry, a relentless duel.

This hunt is far from over.

Blood has been tasted,

it will lead them back

to the injured calf time and time again,

For this is an island surrounded

by an intricate web of thick papyrus swamps

and deep water to the south and west.

The buffalo are unable

to cross the fast-flowing

And to the north,

deep channels carved out by hippos

make it difficult for the herd

to swim to safety in that direction.

There is no escape for the buffalo.

When they do wade into the maze

they get entangled, confused,

and ultimately are forced to return

to the waiting lions.

So, what to us may seem a watery paradise

is for the buffalo a deadly confinement,

shrinking during the seasonal floods

before drying out to a faded savanna,

the males of the Tsaro pride.

They are masters of all on this island,

in particular the buffalo,

they and their Tsaro females

seldom let out of their sight.

There is a significant

new addition to the pride.

Growing up against this backdrop of buffalo,

he needs to be nimble

and confident on his feet

to become a Tsaro lion,