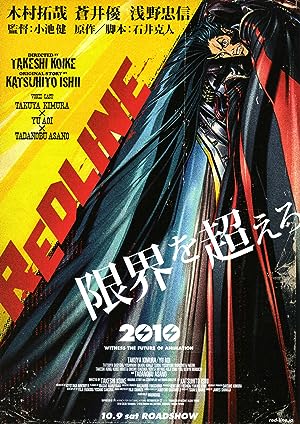 The leading pack has entered the long, long, pass.

In the meantime, relay units have moved to the water stop.

Even after two interplanetary wars,

REDLINE's still popular amongst the public.

Instead of the mainstream anti-gravity engine

My money's on Sonoshee.

I put mine on Deguon.

You can squeeze in!

Who did you bet on?

Pa! Where were you?

With 6 teams having already made it,

the battle for the last spot is raging here at Yellow Line.

The venue for the REDLINE is still under wraps.

The fans are curious to see the result of the viewers' request.

Once the winner of Yellow Line is settled,

REDLINE's venue will be announced.

Get around to the right.

Our own relay unit Portal has just arrived at the final relay point.

Papa! A Portal is here!

It's a Portal! Look!

Now, let's get back to the race and see who's in the lead.

Pa! Get the camera, quick!

It's upside down, Papa!

Papa! The lens cap's on!

Did you see that?! Awesome!

Only 50 klicks left in the Planet Dorothy Yellow Line.

She's heading straight for the finish line in Crab Sonoshee.

The very first REDLINE champion, Captain-2-Block's Captain the Classic is in second.

Followed by the REDLINE regulars,

Count Markdie and Spark, in their Snake Head.

With these four leading the race,

the second group is coming up fourteen seconds behind them.

From planet Supergrass ruled by the Princess with magical powers

Right behind her is Planet Dorothy's own Bons Missile-EP4.

Sweet JP's Transam is seventh at the very end.

The other racers are left way behind.

Though l have my doubts about JP.

What do you announcers know about racing?!

JP's uncorked the nitro on the final stretch!

He's making a break for it!

He broke away from the second group on a rocket boost!

Look out! JP's Transam has caught up!

The heat is on!

The crowd must be going wild.

He held back till the last quarter like you said.

He's the odds on favorite near the finish.

JP's the only one who can pull off a fixed game like this.

None of these guys can beat him at the Yellow Line.

That's what you say.

You don't think JP would try to win this, do you?

But if he wins, he qualifies for REDLINE.

You don't think he may just decide to go for it?

That won't happen. I can guarantee it.

You're starting to get annoying, Cherry Boy Hunter!

Crab Sonoshee's hover jet takes a chance by diving into the river.

You're not getting away!

I'll send you all to hell!

You know, Frisbee, if JP wins,

Look. He isn't called "Sweet JP" for nothing.

Besides, he wouldn't risk getting thrown back in the joint.

And our position on JP?

Now we'll see how your friendship with JP plays out.

Nobody can catch him now.

He's charging toward the finish line on a nitro burst.