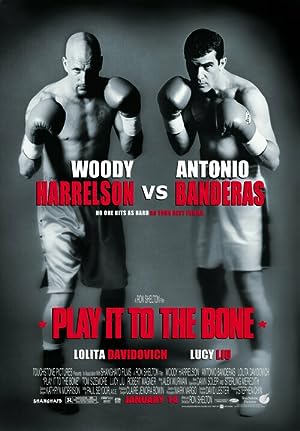 Play It to the Bone

Synopsis: Two aging fighters in LA, friends, get a call from a Vegas promoter because his undercard fighters for a Mike Tyson bout that night are suddenly unavailable. He wants them to box each other. They agree as long as the winner gets a shot at the middleweight title. They enlist Grace, Cesar's current and Vinnie's ex girlfriend, to drive them to Vegas. On the trip, we see flashbacks to their previous title shots, their competitive friendship, and Grace's motivational wiles. (She has her own entrepreneurial dreams.) The fight itself is historic: ten rounds of savagery and courage. Who will win, who'll get the title shot, who gets Grace, and where will she find venture capital?
Genre: Comedy, Drama, Sport
Director(s): Ron Shelton
Actors: Antonio Banderas, Woody Harrelson, Lolita Davidovich, Marie Park
Production: Touchstone Pictures

Gonna be a scorcher today,84 degrees at sunrise.

Gonna be some heat tonight,ringside.

I leave you alone for one hour.One friggin' hour, man.

You throw it all awaylike this?

Now what we gonna do? Huh?

He's got drugs comin' outof his ears, Hank. He's so OD'd,him and a couple of hookers,

they don't even know I'm standin'here talkin' to you, man.

- You let him out of your sight?-Just for a minute.Just for one little minute. I swear.

- That's half my undercard fight.- I know. I know.

- Who the hell's gonna fightChiquito Rosario anyway?- I don't know.

I'm sure Arum's got somebodywatchin' him like a hawk.

He's not fightin' anybody. He tooka ten-count from that light pole.

- Hey.- Did you see All My Children yesterday?

- Did that b*tch leave the doctor ?- Which b*tch? Which doctor ?

Phone call for you guys.Joe Domino.

Joe Domino doesn't want to talk to me,not in five years. Not since the Garden.

Glad to hear it. Now, you knowI speak for Joe Domino, right?So we got a little thing--

This is Joe, fellas. You guysever take a fight on short notice?

I need two guys. You put ona really good show. You guysnever fought each other, right?

- For the sheer goddamn amusementof it ! Where's my cup?- In your hand, sir.

Uh,Joe, do you mind not sayin'the Lord's name in vain?

My sincerest apology. Now, if we couldget outta Sunday School for a minute,

I got a hundred grand for you guysto split, but you gotta getyour asses over here now.

You guys there?Undercard to Tyson.

Give us five minutesto talk and call us back.

Wh-What the hell are you doing?I mean, 50 grand.

Fifty grand. When was the last time thatyou had offered that kind of money?

They wouldn't be callin' usif they didn't need us.

Ron Shelton (September 15, 1945 in Whittier, California) is an American Oscar-nominated film director and screenwriter. Shelton is known for the many films he has made about sports. more…

Play It to the Bone