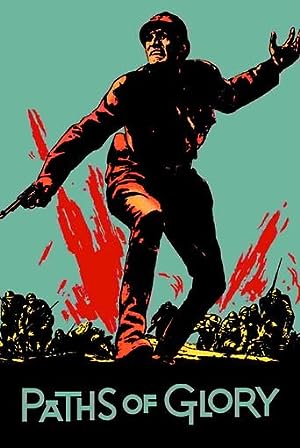 Synopsis: The futility and irony of the war in the trenches in WWI is shown as a unit commander in the French army must deal with the mutiny of his men and a glory-seeking general after part of his force falls back under fire in an impossible attack.
Genre: Drama, War
Director(s): Stanley Kubrick
Actors: Kirk Douglas, Ralph Meeker, Adolphe Menjou, George Macready
Production: United Artists
Nominated for 1 BAFTA Film Award. Another 4 wins & 2 nominations.

Stanley Kubrick was born in Manhattan, New York City, to Sadie Gertrude (Perveler) and Jacob Leonard Kubrick, a physician. His family were Jewish immigrants (from Austria, Romania, and Russia). Stanley was considered intelligent, despite poor grades at school. Hoping that a change of scenery would produce better academic performance, Kubrick's father sent him in 1940 to Pasadena, California, to stay with his uncle, Martin Perveler. Returning to the Bronx in 1941 for his last year of grammar school, there seemed to be little change in his attitude or his results. Hoping to find something to interest his son, Jack introduced Stanley to chess, with the desired result. Kubrick took to the game passionately, and quickly became a skilled player. Chess would become an important device for Kubrick in later years, often as a tool for dealing with recalcitrant actors, but also as an artistic motif in his films. more…