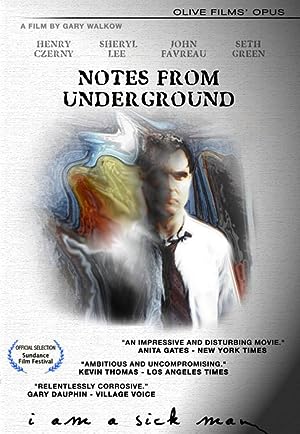 Synopsis: Adapted from Dostoevsky's novella, Henry Czerny plays the narrator, Underground Man. Filled with self-hatred, he keeps a video diary where he discusses his own shortcomings and what he thinks is wrong in contemporary society. His bitterness spills over at a dinner party attended by his old college friends, an occasion which sends him running to a nearby brothel, where he meets Liza (Lee), a young prostitute.
Genre: Drama
Director(s): Gary Walkow
Actors: Henry Czerny, Sheryl Lee, Vic Polizos, Jon Favreau
Production: Renegade Films
1 win.

I think it is my liver, but I refuse to see a doctor.

I am a spiteful man.

I have been living like this for a very long time.

I used to worked in the Department of Urbanism, but no longer.

i was a bad civil servant.

I am not it. I am not nothing.

a crippled person. Too much introspection.

Yes, too awareness is a disease.

say me a thing:

so that I have made things horrible?

Things that that knew perfectly they were abominable?

and when promised same me to change,

to carry to me better, knew right away that it was lying.

Because because I cannot change.

I think too much.

That is my disease.

Is better not to do anything.

I can be totally sincere with me same?

Can be it somebody?

Some memories is so terrible,

that one could not count nor to its friends.

Some is so horrible that I fear

counts to same me.

and whichever better is the man,

more of those secrets hides.

Now I want to remember.

and I have this camera because I hope

that if it story, if I see it,

if I see myself same me counting it, then

perhaps can release to me

If I am sincere

rain has evoked east memory that does not let to me sleep.

it happened twelve years ago.

I was much more young.

Not exactly carefree, never I was it.

But, in a certain sense, was happy,

because it had authority.

This toilet is in center.

Is thus in all the baths.

Would have to be displaced 45 cm to put a handle.

Sure by all means.

Is thing of the draftsman. It is easy to solve.

Then change and returns to bring it.

Is not going to give the license to me?

the planes does not adjust to the norm.

is only necessary to move it half meter.

I will have to lose another day in the tail

so that they approve an insignificant correction to me?

Is a service of the third floor! I will begin by the foundations.

One distances enormous according to the norms.

I can speak with its head?

By all means. It will be enchanted to speak with you.

With the attractive women, retired the Vista first.

Would be able to hold its glance?

Most of the time preferred to be single.

attempt not to justify to me.

That is exactly what attempt: to justify to me.

But I do not want to lie.

I have given my word.

Every few months felt the necessity

to relate to me to the humanity.

To a certain extent, at least.

Only had a well-known. In fact it had several,

but only one still deigned to speak with me.

knew Him the university. It only had free Sundays.

So it tried that my necessity of company

I suspect that I disliked to him, who was an error to go to see him.

But, as usual, my own doubts pushed to me.

Little imagined I them fatal consequences of my visit.

Play golf before having supper.

it happened this way.

Simon was with two companions of the university.

I thought that you would be single.

Then is not thus.

As soon as they saluted to me, although we had been years without seeing us.

he knew that they watched to me over the shoulder after my lack of success.

Good. You do not cut yourselves by me.

I will go with Mr. Z. The Porsche we did not enter all.

wait a little while. This time I do not want to do of driver.

Fyodor Mikhailovich Dostoevsky (English: ; Russian: Фёдор Михайлович Достоевский, tr. Fyódor Mikháylovich Dostoyévskiy, IPA: [ˈfʲɵdər mʲɪˈxajləvʲɪtɕ dəstɐˈjɛfskʲɪj] ( listen); 11 November 1821 – 9 February 1881), sometimes transliterated Dostoyevsky, was a Russian novelist, short story writer, essayist, journalist and philosopher. Dostoevsky's literary works explore human psychology in the troubled political, social, and spiritual atmospheres of 19th-century Russia, and engage with a variety of realistic philosophical and religious themes. He began writing in his 20s, and his first novel, Poor Folk, was published in 1846 when he was 25. His most acclaimed works include Crime and Punishment (1866), The Idiot (1869), Demons (1872) and The Brothers Karamazov (1880). Dostoevsky's oeuvre consists of 11 novels, three novellas, 17 short stories and numerous other works. Many literary critics rate him as one of the greatest psychologists in world literature. His 1864 novella Notes from Underground is considered to be one of the first works of existentialist literature. Born in Moscow in 1821, Dostoevsky was introduced to literature at an early age through fairy tales and legends, and through books by Russian and foreign authors. His mother died in 1837 when he was 15, and around the same time, he left school to enter the Nikolayev Military Engineering Institute. After graduating, he worked as an engineer and briefly enjoyed a lavish lifestyle, translating books to earn extra money. In the mid-1840s he wrote his first novel, Poor Folk, which gained him entry into St. Petersburg's literary circles. Arrested in 1849 for belonging to a literary group that discussed banned books critical of "Tsarist Russia", he was sentenced to death but the sentence was commuted at the last moment. He spent four years in a Siberian prison camp, followed by six years of compulsory military service in exile. In the following years, Dostoevsky worked as a journalist, publishing and editing several magazines of his own and later A Writer's Diary, a collection of his writings. He began to travel around western Europe and developed a gambling addiction, which led to financial hardship. For a time, he had to beg for money, but he eventually became one of the most widely read and highly regarded Russian writers. His books have been translated into more than 170 languages. Dostoevsky was influenced by a wide variety of philosophers and authors including Pushkin, Gogol, Augustine, Shakespeare, Dickens, Balzac, Lermontov, Hugo, Poe, Plato, Cervantes, Herzen, Kant, Belinsky, Hegel, Schiller, Solovyov, Bakunin, Sand, Hoffmann, and Mickiewicz. His writings were widely read both within and beyond his native Russia and influenced an equally great number of later writers including Russians like Aleksandr Solzhenitsyn and Anton Chekhov as well as philosophers such as Friedrich Nietzsche and Jean-Paul Sartre. more…