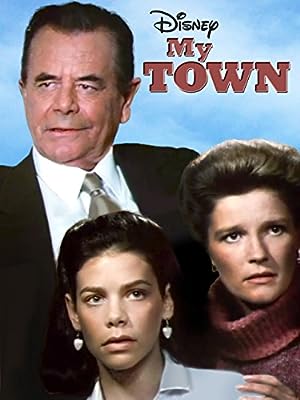 Synopsis: Wheelerville, Ohio, is a small town where people seeking to start new lives can get that chance. The idea came from Lucas Wheeler, the banker and descendant of the town's founder, and the unsold series was to relate incidents in the lives of the people who attempt to rebuild their lives as seen through the eyes of Amber Wheeler, Lucas's pretty granddaughter.
Genre: Drama
Director(s): Gwen Arner
Actors: Meredith Salenger, Glenn Ford, Kate Mulgrew, Mary Jackson

AMBER:
I know I haven't written for a long time.

But let's face it,

life in Wheelerville, is not exactly

life as we know it on this planet.

For a long time, there just wasn't anything worth writing about.

And then it happened.

Lucas woke up one morning with an idea so weird,

He was gonna make Wheelerville the way it used to be.

He was gonna get the people from the city

and to make them wanna come,

the bank would loan them money

to fulfill their wildest dreams.

Dreams they couldn't afford to make happen in the city.

Whatever they wanted to be,

they could be it in Wheelerville, Ohio.

Told you it was weird.

The bank thought so too,

but it didn't matter.

Since Lucas is the president, Lucas got his way.

The Nesbitts were the first.

He was a computer analyst in Chicago

who always wanted to farm.

The bank set him up in business

even though he told Lucas

he'd never even been on a farm.

He should have told him he'd never been on a tractor either.

He'd been a reporter for The New York Times,

but what he really wished for

was to someday publish his own paper.

So Lucas loaned him the bucks and for the first few days,

he was still wishing he could someday publish his own paper.

The rest of the summer was pretty much the same.

People showing up from all over the country.

Half of them expecting to find

Barney Fife and Arnold the Pig.

He was in advertising. She was an interior designer.

So why did they come to Wheelerville?

To open a diner.

AMBER:
At least their lives are changing.

I've been in the same Wheelerville rut for 14 years.

It wouldn't be so bad if there was somebody

to talk to about things.

Bring up anything deeper than Madonna's wedding

and they get brain deaf.

Lucas is too busy,

you get down here this instant, do you hear me?

AMBER:
She's too involved giving herself a heart attack.

I never will understand why

Mom didn't come get us when Daddy died...

But I sure could use her now.

Why this family can't get to meals on time is beyond me.

I've got a whole lot more to do around this house

than wait on people. A whole lot.

Relax! The soaps don't start for another hour.

Don't get smart with me, Tug Wheeler.

Well, now I have a feeling that this is gonna be

What's left of it.

Where are you going? What about breakfast?

Biology is my first class.

Yeah, you're gonna be dissecting frog guts and everything.

Could I borrow some money, Lucas?

I gotta get new clothes.

I just gave you some money for some new clothes.

I know but the thing is,

I kind of don't have it anymore.

What happened to it?

She spent it all on gross tapes.

clothes for the soul.

Ah, well now, that's a real nice way to look at it, Amber.

Then you'll give me the money?

Fine. I just hope you're prepared

after I'm ridiculed about these embarrassing rags.

Billy Fisher says it's her hormones.

They're all screwed up or something.

Why are you leaving so early?

He's never walked to school before!

Gil Grant is an American writer and producer who is working on the CBS hit series NCIS: Los Angeles. He is also developing a television series version of Gattaca for Sony International TV. He has worked on television shows such as 24, NCIS, and NCIS: Los Angeles. He first began writing for the series Eight is Enough in 1977 and producing in 1982 with the series The Powers of Matthew Star. He lives in Los Angeles, California. more…