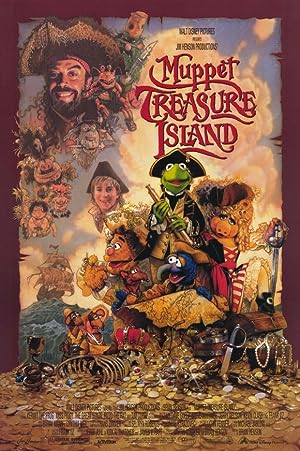 Synopsis: The Muppets are back into action in another movie based on a novel written by Robert Louis Stevenson. Kermit the Frog and his colleagues go on a warfare against ruthless pirates. They also share their problem-solving journey on sea to rescue a treasure.
Genre: Action, Adventure, Comedy
Director(s): Brian Henson, David Lane
Actors: Tim Curry, Billy Connolly, Jennifer Saunders, Kevin Bishop
Production: Buena Vista
4 nominations.

I was Flint's first mate|that voyage...

That's where we buried|the treasure.

Gold and blood,|they were Flint's trademarks.

He'd leave both|behind him that day.

Shiver my timbers|Shiver my soul

There are men whose hearts|are as black as coal

And they sailed their ship|'cross the ocean blue

A bloodthirsty captain|and a cutthroat crew

It's as dark a tale|as was ever told

Of the lust for treasure|and the love of gold

Shiver my timbers|Shiver my sides

There are hungers as strong|as the winds and tides

And those buccaneers|drown their sins in rum

The devil himself would|have to call them scum

Every man aboard would have|killed his mate

For a bag of guineas|or a piece of eight

A piece of eight

When de money in de ground|Dere's murder in de air

Murder in the air

Shiver my timbers|Shiver my bones

There are secrets that sleep|with old Davy Jones

And when greed and villainy|sail the sea

You can bet your boots|there'll be treachery

Shiver my timbers|Shiver my sails

and only Flint, his own self,|returned.

up and died afore they could get|back to that cursed island...

and dig up the treasure.

No one knows to this day|who has old Flint's map.

Now, isn't that a story|worth the hearing?

It was the first dozen|times we heard it.

I'll drink to that.

But who has|the map now, huh?

If I had it, my friends and I wouldn't|be here serving you rum, Mr Bones.

That's right. We'd be out|searching for that treasure...

boldly going where no man|has gone before.

If I had that treasure map,|I'd be tradin' it for a decent meal.

Aye! Beware the one-legged man!|He's the one to fear!

Don't worry, Captain.|We'll watch for him.

If he comes pokin' 'round here,|you run for me whippety-quick!

Ya pays your bills,|and then ya shove off.

Oh, you're drunk again,|are ya?

Boys, look at the state|of this place!

How comes it gets to be|such a pigsty, huh?

Don't forget to come back tomorrow|for our lunchtime special:

When you're finished here,|you can go and clean up in the kitchen.

I left some table scraps|in there for your supper.

last night you forgot|to put out the lantern!

If you forget that again,|there'll be no table scraps for a week!