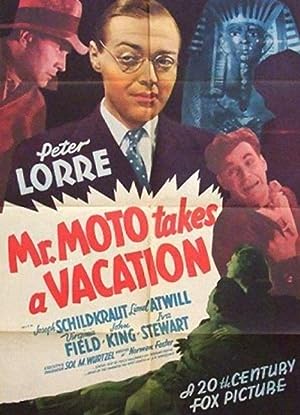 Synopsis: A young and handsome archaeologist discovers the crown of the Queen of Sheba, and returns with it to a San Francisco museum where it is put on display. Its safety is in doubt as many criminals want the crown -- an international pair of criminals, a San Francisco gangster and his cohorts, and a super criminal known as Metaxa. Mr. Moto is forced to postpone his vacation while he deals with the threat.
Genre: Action, Crime, Drama
Director(s): Norman Foster
Actors: Peter Lorre, Joseph Schildkraut, Lionel Atwill, Virginia Field
Production: 20th Century Fox Film Corporation

And now, under the merciless rays

of the pitiless Arabian sun...

those of us who are privileged to be here

are waiting with tense excitement.

The great moment has come

the moment which will prove to the world...

whether the astounding theory

of these intrepid adventurers is right...

or whether they have been following

As I look down into

the cavernous depths of the excavation...

I can see the chief actors

First, as he should be,

the young and brilliant archaeologist...

the feverish tensity of this moment.

from the four corners of the earth...

the dust of untold centuries...

- from an object of tremendous antiquity.

of the expedition is handing his find over...

recently hurried to this faraway waste

to lend his knowledge and experience.

You are right, my friend. This emblem

is the line ofJudaea seal of Solomon.

This contradicts all of my former research!

- Gentlemen, there is no doubt in my mind.

- I'm holding in my hand the crown of Balkis, Queen of Sheba!

Think of it, ladies and gentlemen.

uncovered before my very eyes...

of the Queen of Sheba!

My friend, you have unearthed a symbol

But keep in mind the immense

worldly value of these jewels.

Guard them as you would your life.

Don't you worry. Until we get it aboard ship,

Prince Suleid and his men will look after it.

- After that, my responsibility.

- Surely no modern collection boasts such jewels as these.

Even the emeralds of His Highness,

the Aga Khan, cannot compare with them.

Uh, the journalists are still waiting,

Mr. Stevens. Shall I send them away?

upon Mr. Stevens than he cares to admit.

that bears a crown?

He would be less uneasy if he knew

that you were here to guard it, Mr. Moto.

You see, I was in Cairo when news came

of Mr. Stevens's discovery of this ancient site.

was in the nature of a gamble...

which has been justified

by the finding of this crown.

Still you leave me

I cherish the hope

that this priceless and exotic treasure...

will lead me to a certain genius

in the world of crime.

You believe a criminal is here?

I hardly expect him to be

so obvious or... so clairvoyant...

but sooner or later he will come

to wherever this crown may be.

It appears to me that

Jewels such as these are certain

to attract many thieves...

would be among them.

You are in error, Prince. Uh, this certain man

will be compelled to make an attempt.

a kleptomaniac upon a grand scale.

The more unattainable the object,

the more determined he grows to possess it.

You may remember the daring

from the Tower of London?

But that was the work of, uh

What was his name? Um Metaxa.

There have been several unsolved cases

in the past few years...

which, to my humble mind,